Stryuk said at least 1,500 people have been killed in Sievierodonetsk and about 12,000 to 13,000 remain in the city, where he said 60% of residential buildings have been destroyed. 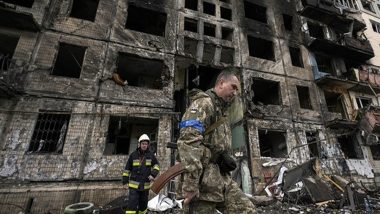 Kyiv, May 27: The Ukrainian city of Sievierodonetsk is the center of fierce fighting in the east. Mayor Oleksandr Stryuk says it's holding out even though a Russian reconnaissance and sabotage group went into a city hotel. Stryuk said at least 1,500 people have been killed in Sievierodonetsk and about 12,000 to 13,000 remain in the city, where he said 60% of residential buildings have been destroyed.

Sievierodonetsk is the only part of the Luhansk region in the Donbas under Ukrainian government control, and Russian forces have been trying to cut it off from the rest of Ukrainian-controlled territory. Stryuk said the main road between the neighboring town of Lysychansk and Bakhmut to the southwest remains open, but travel is dangerous. He said only 12 people were able to be evacuated Thursday. Russia-Ukraine War Latest Updates and Key Developments: Russia Scraps Age Limit for Joining Military To Expand Recruitment.

— This tears my soul apart': A Ukrainian boy and a killing

— West mulls having Russian oligarchs buy way out of sanctions

— US aims to leverage Russia-Ukraine bloc against China

KYIV, Ukraine: Ukrainian President Volodymyr Zelenskyy pleaded with the West on Thursday to send multiple launch rocket systems to Ukraine as soon as possible to give it a chance against the Russian offensive in the eastern Donbas. “We are fighting for Ukraine to be provided with all the weapons needed to change the nature of the fighting and start moving faster and more confidently toward the expulsion of the occupiers,” Zelenskyy said in his nightly video address to the nation.

He said Russian forces are wiping some eastern towns from the face of the Earth and the region could end up “uninhabited.” “They want to turn Popasna, Bakhmut, Lyman, Lysychansk and Sievierodonetsk into ashes as they did with Volnovakha and Mariupol,” Zelenskyy said.

In the shelling Thursday of Kharkiv, Ukraine's second-largest city, Zelenskyy said at least nine people were killed and 19 wounded. Among those killed was a five-month-old baby and the infant's father with the child's mother seriously injured. Zelenskyy also had harsh words for members of the European Union who are resisting imposing even tougher sanctions on Russia including a ban on the import of Russian oil and gas, the major source of revenue for Moscow.