Russian lawmakers have passed a bill which removes age limits for professional soldiers joining the military and could be a way for the Russian armed forces to expand recruitment. 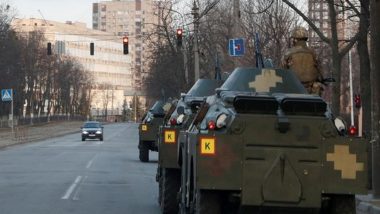 Moscow, May 25: Russian lawmakers have passed a bill which removes age limits for professional soldiers joining the military and could be a way for the Russian armed forces to expand recruitment.

The lower house of the Russian parliament passed the bill in all three readings on Wednesday to scrap an age limit of 40 for Russians signing their first voluntary military contracts. Russia-Ukraine War Updates: Siemens To 'Exit' Russian Market as a Result of Ukraine War.

The chair of the parliament's defence committee Andrei Kartapolov said the measure would make it easier to hire people with “in-demand specialisms”. A description of the bill on the parliament website indicated older recruits could be suited to operating precision weapons or serving in engineering or medical roles.

Russian authorities have said that only volunteer contract soldiers are being sent to fight in Ukraine, though they have acknowledged that some conscripts were drawn into the fighting by mistake in the early stages.

In recent years, the Russian military has increasingly relied on volunteers. All Russian men aged 18-27 must undergo one-year compulsory military service. Many avoid the draft through college deferments and other exemptions.

— Saving the children: War closes in on eastern Ukrainian town

— US to end Russia's ability to pay international investors

WARSAW: A leader of Poland's Catholic Church says his recent visit to sites of mass murder in Ukraine led him to conclude that humans have drawn no lessons from previous deadly wars but have only improved their killing methods.

Archbishop Stanislaw Gadecki, the head of Poland's Bishops' Conference, said that when he prayed last week over the mass graves found after Russian troops left the town of Bucha he had “the sad thought that human civilization isn't really making any progress on key issues”.

“We've heard so many declarations and incantations over recent decades about such crimes no longer being possible, given the present level of civilisation, but murdering people has turned out to be just as possible as before,” Gadecki said in an interview for Poland's Catholic news agency KAI, published this week.

“We do not see any humanitarian progress in the world, apart from technical progress that makes murdering people possible on a larger scale,” he said.

DAVOS: Ukrainian President Volodymyr Zelenskyy says his country will not give up land in return for an end to the war with Russia following its invasion. Speaking by video link Wednesday at a “Ukrainian breakfast” during the World Economic Forum's gathering in Davos, Zelenskyy said he didn't believe Russian president Vladimir Putin fully understood what was going on in Ukraine.

Responding to a question from CNN's Fareed Zakaria about whether it was possible to negotiate an end to the conflict, Zelenskyy said through a translator: “Ukraine is not going to concede our territory. We are fighting in our country, on our land.”

He added that the war is being fought “for our land, for our freedom, for our independence, and for our future.”

As a first step to diplomatic negotiations, Zelenskyy says Russia would need to demonstrate its desire to engage in talks and “should demonstrate at least something like steps withdrawing their troops and equipment to the position before February 24,” when the invasion began.

MOSCOW: The Russian military says it has destroyed the production facilities of a key Ukrainian maker of aircraft engines. Russian Defence Ministry spokesman Maj. Gen. Igor Konashenkov said on Wednesday that the military has used long-range air- and sea-launched missiles to destroy the Motor Sich plant in Zaporizhzhia.

Motor Sich has been a key maker of aircraft engines since Soviet times. It has specialised in helicopter engines, which were also used to equip Russian helicopters before the supplies were halted following Russia's 2014 annexation of Ukraine's Crimean Peninsula.

COPENHAGEN: A political forum for cooperation between governments around the Baltic Sea says ties with Russia “will remain severed until cooperation under the fundamental principles of international law has become possible again”.

The 11-country Council of the Baltic Sea States said on Wednesday that Russia's invasion of Ukraine “is entirely incompatible with the cooperative model of international relations in the Baltic Sea Region (and) has a long-term negative impact on regional security”.

The CBSS includes the nations around the Baltic Sea plus Iceland, Norway and the European Union. It suspended Russia last March.

Moscow, on the other hand, said it was leaving the group because EU and NATO member countries were seeking to use the CBSS as “an instrument of anti-Russian policy”.

MOSCOW: The Russian military says the key Ukrainian port of Mariupol is functioning again after three months of fighting. Russian Defence Ministry spokesman Maj. Gen. Igor Konashenkov on Wednesday said the military has finished clearing the port of mines and it is now fully operational.

The Russian forces took control of Mariupol, the strategic port on the Sea of Azov, after the last Ukrainian defenders at the giant Azovstal seaside steel plant laid down their weapons.

POKROVSK (Ukraine): Russian strikes are hitting the eastern Ukrainian town of Pokrovsk, in the Donetsk region, causing at least some injuries. Pokrovsk administration head Ruslan Trebushkin said in a Facebook post that the damage and the number of injured people in the strikes early Wednesday were still being assessed.

One strike left a crater at least three metres deep, with the remnants of what appeared to be a rocket still smoldering. A row of low terraced houses near the strike suffered significant damage, with roof tiles blown off, door frames ripped from walls and pieces of concrete scattered around.

“There's no place left to live in, everything is smashed,” said Viktoria Kurbonova, a mother-of-two who lived in one of the terraced houses. The windows had been blown out by an earlier strike about a month ago and were replaced with plastic sheeting. That, she said, probably saved their lives because no glass flew around.

The UK Ministry of Defence, in an update posted on Wednesday morning, says there has been no “significant” merchant shipping in or out of Odessa since the start of the Russian invasion.

The ministry says that the blockade, combined with the lack of overland routes, means that significant supplies of grain remain in storage and can't be exported.

“While the threat of Russia's naval blockade continues to deter access by commercial shipping to Ukrainian ports, the resulting supply shortfalls will further increase the price of many staple products,” the ministry said.