Get latest articles and stories on World at LatestLY. The New York State Police have identified the suspect, who attacked Salman Rushdie, as Hadi Matar, 24, from Fairview, New Jersey while the motive behind the act is still unknown. 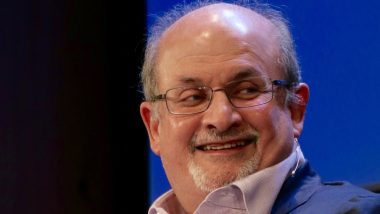 Washington, August 13: The New York State Police have identified the suspect, who attacked Salman Rushdie, as Hadi Matar, 24, from Fairview, New Jersey while the motive behind the act is still unknown.

"The suspect has been identified as Hadi Matar, 24, from Fairview, New Jersey. Earlier today, approx. at 10:47 am, the speaker Rushdie,75 and Henry Reese,73 had just arrived at the stage of the institution and shortly thereafter the suspect jumped out of the stage and attacked at least once in the neck and at least once in the abdomen," State Police Troop Commander Major Eugene J. Staniszewski said in a news conference.

The police further said that several members of the institution and the audience quickly responded to the incident and took the suspect to the ground. A doctor in the audience "immediately began first aid for Rushdie" after the stabbing, Major Staniszewski said. The authorities didn't reveal much information about the suspect. Video: Author Salman Rushdie Attacked on Lecture Stage at Chautauqua Institution in New York.

Earlier, Salman Rushdie, who faced death threats over his book 'The Satanic Verses', was "stabbed" on stage in Western New York state. Earlier, New York Governor Kathy Hochul said the author is alive and has been transported to a local hospital.

"He is alive and has been transported, airlifted, to safety... The event moderator was attacked as well; he's getting the care he needs at a local hospital," she said. The New York State Police said in a statement that a male suspect ran up onto the stage prior to a speaking event at the Chautauqua Institution in Chautauqua and attacked Rushdie.

It said the author suffered an apparent stab wound to the neck and was transported by helicopter to an area hospital. A suspect has been taken into custody. The interviewer with Rushdie was also attacked during the incident and he suffered a minor head injury, the police said.

"State Police are investigating the attack on author Salman Rushdie prior to a speaking event at the Chautauqua Institution in Chautauqua, NY," the statement said.

The seventy-five-year-old author, who caught the limelight for his novel 'Midnight's Children' in 1981, had received a fatwa for his 1988 book. The Satanic Verses book led to a fatwa, a religious decree, by the then Iranian revolutionary leader Ayatollah Ruhollah Khomeini. The threat forced him into hiding for several years.

Meanwhile, UK Prime Minister Boris Johnson tweeted, "Appalled that Sir Salman Rushdie has been stabbed while exercising a right we should never cease to defend. Right now my thoughts are with his loved ones. We are all hoping he is okay." Salman Rushdie Health Update: Author on Ventilator, Likely to Lose an Eye, Liver Stabbed and Damaged, Says Report.

And Home Secretary of UK Priti Patel said, "Shocked and appalled to hear of the unprovoked and senseless attack on Sir Salman Rushdie. Freedom of expression is a value we hold dear and attempts to undermine it must not be tolerated. My thoughts are with Sir Salman and his family."

"State Police are investigating an attack on author Salman Rushdie prior to a speaking event at the Chautauqua Institution in Chautauqua, NY," the statement said. American author Stephen King said, "I hope Salman Rushdie is okay." Suzanne Nossel, CEO of PEN America, said they can think of no comparable incident of a public violent attack on a literary writer on American soil.