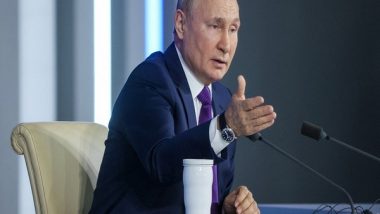 A spokesperson of the Taliban Inamullah Samangani reacted and said that there is neither potential nor a de facto threat from Afghanistan's border to any other country, reported Khaama Press.

Putin said on Monday that the security situation at the Afghanistan-Tajikistan border is a concern.

The Russian President in a visit to Tajikistan met with Tajikistan's President Imam Ali Rahman and said that Russia is seeking to mitigate security threats by strengthening its military base in Tajikistan with weapons and other equipment, reported Tolo News.

"You know that we're actively working toward enhancing Tajikistan's defense capability. In keeping with our agreements, some essential weapons and hardware have been delivered lately in line with our agreements to bolster Tajikistan's armed forces and make Tajikistan capable of efficiently opposing any external threats to your country," said Putin, reported Tolo News.

The Russian officials repeatedly expressed concerns over possible security threats from across the border with Afghanistan, but the Islamic Emirate pledged that Afghanistan's soil will never be used to threaten a country.

Moreover, Putin mentioned his country's military equipment given to Tajikistan's military forces to get stronger and address potential threats from other countries, reported Khaama Press.

Vladimir Putin's concerns over insecurity on Afghanistan's borders with Central Asian countries are not new, earlier; he had expressed some concerns and had discussed the issue with Tajikistan, Uzbekistan, and Turkmenistan's heads of state.

Russia has also conducted military drills with Tajikistan's forces on the border with Afghanistan and Putin described his country's military base in Tajikistan as a significant element of regional security.