“I don't think we're necessarily going to be able to see the consequences of those decisions this autumn. “There may be battles, but who has won the battle may not be immediately discernible.” 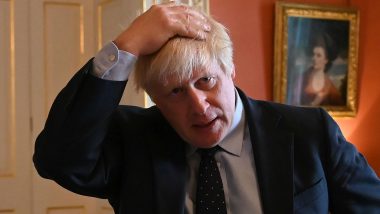 London, September 1: British lawmakers returned to Parliament on Tuesday after a six-week summer break, with Brexit and the coronavirus pandemic setting the stage for a turbulent fall.

Prime Minister Boris Johnson, who is trying to coax British workers back to their offices to boost the economy, held a meeting of his Cabinet, with all ministers attending in person for the first time since the U.K. went into a coronavirus lockdown in March. Also Read | India-China Face-Off: MEA Confirms Chinese Aggression on Aug 31, Says Timely Action Thwarted Bid to Change Status Quo.

“Bit by bit this incredible country is getting back on its feet and recovering from this crisis,” Johnson told the Cabinet, acknowledging that both country and government had been through a rough patch.

“In the last few months we've been sailing into the teeth of a gale," he said, promising there were "brighter days and calmer seas ahead of us.” The U.K. political agenda for the next few months would challenge any government. Also Read | Facebook Row: IT Minister RS Prasad Writes to Mark Zuckerberg, Says Problematic When FB Employees Abuse PM Narendra Modi ‘On Record’.

It includes reviving an economy that shrank by a fifth during lockdown and girding for a possible second wave of virus infections. The government must also prepare for a final break with the European Union when a post-Brexit transition period ends on December 31.

Britain officially left the EU on January 31, and the two sides gave themselves 11 months to strike a new trade deal. But negotiations are deadlocked over key issues including state aid for businesses and fishing rights. If there is no deal, 2021 will begin with tariffs and other impediments to trade that could cause major economic damage on both sides of the Channel.

The British government also faces the prospect of a huge increase in unemployment after October 31, when it ends a program to pay the salaries of millions of furloughed workers. Johnson's Conservatives have a hefty majority of 80 in the 650-seat House of Commons, but his government has been weakened by its unsteady handling of the pandemic.

Britain's official virus-related death toll stands at more than 41,500, the highest in Europe, and the government has performed U-turns on issues including wearing masks in public and quarantining people arriving from abroad. Both ideas were initially resisted, then implemented.

In another about-face, last month the Conservative government scrapped a controversial algorithm-based system to award grades for cancelled high school exams that had resulted in thousands of students missing out on university places.

Johnson's spokesman, James Slack, defended the government's record, saying it had been “dealing with an unprecedented situation.” “We have been guided by the scientific advice and as more has been learned about the virus, we have ensured we are taking the right steps to keep the public safe,” he said.

Hannah White, deputy director of political think-tank the Institute for Government, said the government — elected on a promise to “level up” the country by reviving long-neglected regions — didn't want to be “defined by coronavirus.” “They want to be showing that they are doing all these other things they came in saying that they wanted to do — but there is clearly a capacity issue,” she said.

The main opposition Labour Party, trounced by Johnson's Tories in December's election, has been regrouping under new leader Keir Starmer, who is steering the party towards the center after replacing left-winger Jeremy Corbyn in April.

Johnson, meanwhile, has been rejigging the government to increase the power of a small group of trusted ministers and aides. On Tuesday he named a new head for the civil service — Simon Case, a former private secretary to Prince William. Case's predecessor had reportedly clashed with Johnson's top aide, Dominic Cummings.

White said the government considered Case “a fixer” who could help it negotiate the tricky months ahead. “It's certainly going to be busy and there are lots of really important, significant decisions to be made,” she said. “I don't think we're necessarily going to be able to see the consequences of those decisions this autumn. “There may be battles, but who has won the battle may not be immediately discernible.”