US President Joe Biden on Thursday welcomed the application by Sweden and Finland to join the North Atlantic Treaty Organisation (NATO) saying that it was a momentous day and that his government extends "full, total, complete backing" to the decision made by the Nordic countries. 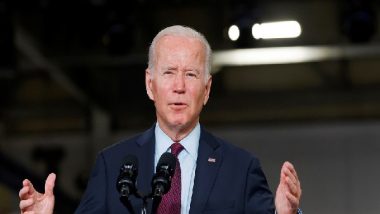 Washington, May 19: US President Joe Biden on Thursday welcomed the application by Sweden and Finland to join the North Atlantic Treaty Organisation (NATO) saying that it was a momentous day and that his government extends "full, total, complete backing" to the decision made by the Nordic countries.

Addressing a joint press conference, following talks with Swedish Prime Minister Magdalena Andersson and Finnish President Sauli Niinisto, President Biden said "Today, I am proud to welcome and offer the strong support of the United States for the applications of two great democracies, and two close, highly capable partners to join the strongest most powerful, defensive alliance in the history of the world." Finland and Sweden Submit Applications to Join NATO Amid Russia-Ukraine War.

The US President emphasized that the accession of Sweden and Finland amid the ongoing conflict in Ukraine shows that NATO is still relevant as an allaince. "Today, there is no question, NATO is relevant, it is effective and it is more needed now than ever. The indispensable alliance of decades past is still the indispensable alliance for the world we face today and I would argue tomorrow as well. And the decision, Sweden and Finland... have made is a testament to that commitment," President Biden said.

Talking about Finland and Sweden joining the cross-Atlantic alliance, Biden said that the two countries would enhance the security of the alliance. "They meet every NATO requirement and then some and having two new NATO members in the high north will enhance the security of our alliance and deepen our security cooperation across the board," President Biden said. "Finnish and Swedish troops have already served shoulder to shoulder with US and NATO forces in Kosovo, in Afghanistan, in Iraq and both Finland and Sweden are already working in coordination with the United States and other allies and partners to support the brave people of Ukraine as they defend their freedom against Russia's invasion," President Biden further said. Russia-Ukraine War: US President Joe Biden Resists Ukrainian Demands for Long-Range Rocket Launchers, Says Report.

The Swedish PM and Finnish President too spoke on the occasion, extending regards to the US for its strong support to their membership. "Together we (Finland and Sweden) are taking a historic step by seeking to join NATO. Finland has made its decision after rapid but a very thorough process. The process has once again revealed the strength of Finnish democracy," Finnish President Sauli Niinisto said. "For Sweden, after 200 years of military non-alignment, Sweden has chosen a new path... Russia's full-scale aggression against the sovereign and democratic neighbour was a watershed moment for Sweden," Sweden's Prime Minister Magdalena Andersson remarked.

Finland and Sweden have been considering plans to join NATO since Russia launched a "military operation" in Ukraine on February 24. Later in March, NATO Secretary-General Jens Stoltenberg said the alliance would fast-track the membership applications of Finland and Sweden if they decide to join.