Mazda Huntsville plant is set to start the production of cars in the coming year. The joint venture manufacturing unit between giant car markers Mazda and Toyota provides a massive 2.3 billion investment to the state. 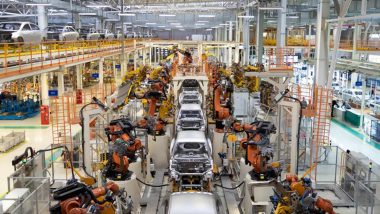 Mazda Huntsville plant is set to start the production of cars in the coming year. The joint venture manufacturing unit between giant car markers Mazda and Toyota provides a massive 2.3 billion investment to the state. Mazda Toyota Manufacturing (MTM) has hired about 1,600 people and is planning to hire more than 2,000 additional employees to join its workforce, eventually reaching up to 4,000 once production is fully operational next year. The plant can produce 300,000 vehicles a year, evenly split between the two automakers.

“North Alabama welcomed us with open arms, and I hope the community is just as excited as we are about our production,” said Janette Hostettler, vice president of production. “This will truly be a product of Alabama, assembled right here and sold all over the United States.”

MTM’s investment increased to more than $2.3 billion. The initial announcement was 1.6 billion, and later the parent companies announced an additional $830 million commitment last summer. The additional investment announced in August 2020 will allow MTM to incorporate more state-of-the-art technologies into its manufacturing processes.

The joint venture partnership between Mazda Motor Corp. and Toyota Motor Corp. is in a hiring boom to prepare for production on the carlines from the Huntsville facility next year. “Mazda and Toyota’s increased commitment to the development of this manufacturing plant reiterates their belief in the future of manufacturing in America and the potential for the state of Alabama to be an economic leader in the wake of unprecedented economic change.” Governor Ivey stated during the announcement of this ambitious project.

Greg Canfield, Secretary of the Alabama Department of Commerce, said MTM's investment in its Huntsville assembly plant would transform the North Alabama region. "We're confident that the groundbreaking collaboration between Mazda and Toyota will drive growth not only for the companies but also for North Alabama for generations. We've got some serious opportunities to provide serious careers for Alabamians in this region," Secretary Canfield said. Canfield also said that Mazda Toyota would bring even more expansion opportunities to the state's auto supply chain and maybe even bring more auto companies into the state. "We have not stopped in recruiting companies into the state to support the automotive supply chain. MTM is playing a large part in our ability to recruit new suppliers to the state, so there's still a lot left to be done in Alabama and a lot more to come in the automotive sector." Canfield explained.

The MTM Huntsville plant is a big assembly unit where the carlines are manufactured by assembling the parts for the respective production models. The success of the assembly line relies on efficient parts planning to make sure it is available for assembly units. Mazda North American Operations, headquartered in Irvine, California, manages the finance and IT area has created Parts objectives application to plan the parts required for this facility to produce Mazda carlines. This application widened the financial budget access of Mazda’s dealers across North America. With the help of this application, the Huntsville plant has access to plan the necessary parts required for a financial year. The parts budgeting and forecasting application use the driver-based approach to create annual objectives and monthly needed parts.

The driver-based budget application helps the organization to identify the main drivers that impact financial performance. It also allows for tracking the performance of each business driver over the period, which helps in effective and efficient financial planning. Traditional financial planning or decision-making does not consider the detailed statistics and leads to ineffective financial decisions and unnecessary resources. The driver-based budget approach retrieves data from business activities, stores it centrally, and prepares outputs based on pre-determined parameters. The business users such as strategists, operating managers, and dealers make decisions based on data access, which means the application looks suitable for within the organization and for connected stakeholders such as suppliers and dealers.

Before implementing the Parts Objectives application, this whole process was being done manually by the finance team at Mazda. The manual process would take a lot of time and effort, and it wasn't efficient. The finance department used excel spreadsheets to form budgets for the manual process. The creation of the parts objective's application allowed the finance team to manage the whole process more efficiently. The system-defined budgeting helped all the dealerships to not only access their budgeted sales, but the sales are also justifiable because they are derived from the previous trends of sales from those suppliers. Usage of prior year parts sales trend increases the efficiency and the effectiveness of the whole budgeting process.

Driver based approach helped Mazda to identify the weak drivers and replace them with strong ones. Mazda has excelled in developing driver-based budgeting applications for other business areas. The parts objectives application helped the organization save hundreds and thousands of dollars annually. On the other side, it helped to highlight the organization's idle resources and details of funds that can be utilized to access the minimum required to meet the liquidity standards. It also helped improve the parts planning for assembly lines and helped to cut the budget by ordering the suppliers the parts based on production schedules. This saved costs in logistics, supply chain, reducing wastage of parts, and warehousing.

The application helped identify the demand and supply gap and highlighted the opportunity to manufacture and sell more cars based on upcoming demand forecasts. An increase in car sales presumes that the revenue sales will increase by 15%-17% in the forthcoming years. Based on demand and supply forecast statistics, the company believes in expanding its production facility in Huntsville by the following year to start manufacturing to achieve the demand.

Overall, the implementation of driver-based applications helped Mazda stand out in the worst economic downturn because of its strategy to bring in-house innovation. The parts objectives application helped organize the budgets based on productive drivers and helped the assembly line be more effective. Also, it helped cut costs on unproductive work process activities, helped identify inactive funds to be used for a constructive purpose, helped forecast the upcoming sales and demand. These benefits bring Mazda to extend the production facility and employ more employees to support its upcoming production plans.