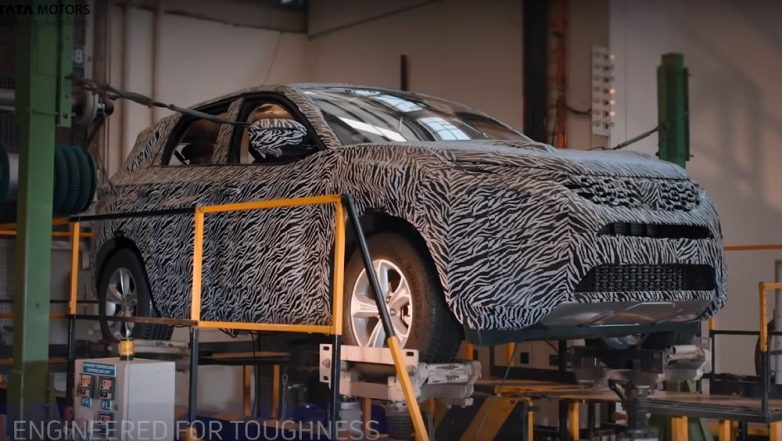 Tata Harrier from the house of Tata Motors is one of the most awaited SUVs in the Indian market today. Revealed at Auto Expo 2018 earlier this year as Tata H5X SUV concept, the company is expected to launch the new SUV in the domestic market by early 2019. To maintain the hype the SUV has already created the car maker has been revealing the teasers and videos of the SUV. Further revealing the details about the SUV, the company has officially revealed that Tata Harrier SUV will be powered by an all-new 2.0-litre KRYOTEC Diesel engine. Tata Harrier SUV Officially Teased Again; Undergoes Water Wading Test - Watch Video.

The best in diesel engine technology - KRYOTEC takes its inspiration from Cryogenic rocket engine that is known for reliability and power, which is also benchmarked against global standards of refinement as well as performance. The new 4-cylinder powerful diesel engine is engineered for delivering exceptionally refined drivability and performance, claims the company. Moreover, the engine on the new Tata Harrier also has been tested extensively for endurance under extremely stern conditions. Previously, it was speculated that the SUV will be powered by Fiat sourced Multijet 2.0-litre engine, also equipped on Jeep Compass. Tata Harrier SUV aka H5X Concept Official Teaser Released Ahead of India Launch - Watch Video.

The 2019 Tata Harrier SUV will be based on company’s OMEGA modular platform making it the first vehicle from Tata to carry this new platform. To be positioned above Tata Hexa, the SUV will be flagship offering from the homegrown automaker carrying OMEGARC Architecture. It is the same architecture that form basis for Land Rover LS550 platform, which underpins Discovery Sport. Tata Harrier Aka Tata H5X Official Website LIVE; 5 Things to Know About the SUV.

Slated to be launched in the domestic market, Tata Harrier SUV will be pitted against the Jeep Compass and Hyundai Creta. As far as the prices are concerned, the SUV is expected to be priced from Rs 14 lakh (ex-showroom) for the entry level variant.