Bunty Aur Babli, which clocked 15 years recently, was an homage to the "chor-police" cinema of the 1970s and 1980s, says director Shaad Ali, who has fond memories of shooting the small town-set romantic comedy. The film featured Abhishek Bachchan and Rani Mukerji as the titular pair of con artistes, who had Amitabh Bachchan as the cop on their trail. 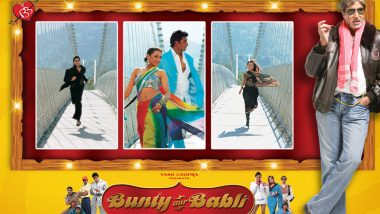 Bunty Aur Babli, which clocked 15 years recently, was an homage to the "chor-police" cinema of the 1970s and 1980s, says director Shaad Ali, who has fond memories of shooting the small town-set romantic comedy. The film featured Abhishek Bachchan and Rani Mukerji as the titular pair of con artistes, who had Amitabh Bachchan as the cop on their trail. From the short kurtas that Rani's character wears to Aishwarya Rai Bachchan's special appearance in the hit song "Kajra Re", the 2005 film enjoyed a rare popularity among the masses. 43 Years of Amar Akbar Anthony: Amitabh Bachchan Reveals How This Film’s Box Office Performance Easily Beats Baahubali 2’s Records.

"It's kid's genre, it is chor-police, which is a common game for the children to play. As someone who grew up in the '70s and '80s, I had seen several films with the premise of cop and thief. Those films had a great influence on my childhood and early growing up years. "I wanted to tell a small-town story as I am from small town. The germ of the story came from these two small-town people who dream big," Ali told PTI in an interview. 14 Years of Fanaa: Kajol Shares a BTS Pic with Aamir Khan from the Sets, Says ‘The Film Was Quite Different from What We Read on Paper’

The director said from songs to some costumes, the film was his way of bringing in the influences from films such as "Amar Akbar Anthony", "Parwarish", "Suhaag", "Don", "Muqqadar Ka Sikander" and "Sholay" - all of which interestingly feature Amitabh Bachchan, among other famous heroes of the era like Vinod Khanna, Dharmendra and Rishi Kapoor. The film, co-written by producer Aditya Chopra and Jaideep Sahni, was one of the early projects to tap into the energy of small-town India, which has emerged as the favoured setting for filmmakers in recent years.

Ali, who made his directorial debut in 2002 with "Saathiya" for the production house Yash Raj Films, said "Bunty Aur Babli" was the film that helped him find his voice as a filmmaker. "Saathiya", starring Rani and Vivek Oberoi, was the Hindi remake of the Tamil hit "Alaipayuthey" (2000), helmed by Ali's mentor, Mani Ratnam. "'Saathiya' was a remake and we knew what we were doing.

"Here, I had to find my own voice what is the closest thing to me, where I am coming from, what is my strength... I had to look deep inside and come up with something that was me. So I had to go to my roots (Kanpur)," he said.

As implausible as it appeared on paper, Ali said a lot was riding on whether they could pull of the famous sequence where the title characters 'sell off' the Taj Mahal. "When we came up with the idea that these two people are con artistes and if they don't sell Taj Mahal then they haven't done anything. Everyone wondered how do we show it. I was sure Taj Mahal had to be sold in the movie. That was the big idea and it became the highlight of the film," he recalled. The director said Rani was always his first choice for the role of Babli and that he wanted Amitabh Bachchan, who has often played a cop through his career spanning five decades, as the policeman. Abhishek Bachchan boarded the project later.

"That was a difficult casting as we had Mr Bachchan and Abhishek in the film but not as father and son. We were convinced with the characters that we had written for them. We took a risk and even they did. Maybe it was better that they didn't play father and son. It was a big gamble but paid off," he said, adding that Amitabh Bachchan had no role in Abhishek Bachchan being cast in the film. "I had always liked Abhishek.

There was a film called 'Tera Jadoo Chal Gayaa' in which he played the role of a UP guy and we felt he had this innocent, vulnerable small-town vibe to him. He worked hard on the diction and put his full energy and gave it his all to get into the character." The team members were such a fan of Amitabh Bachchan that they often paid tributes to the industry veteran by playing songs from his old films on the sets, Ali recalled.

"Bunty Aur Babli" is getting a sequel with Varun V Sharma attached as a director. Rani is returning with Saif Ali Khan opposite her and a pair of new actors in Siddhant Chaturvedi and Sharvari, which will be her Bollywood debut.

Asked whether there were plans to remake the film after it released in 2005, Ali said there was a discussion around 2007-2008, adding maybe the producers found an idea only recently. Though Ali is not part of the sequel, he said, the film will always be a part of him. "It is still my blood. Whenever the sequel comes out, I will go and watch it. I hope it will be a great film. I don't think they will let the 'Bunty Aur Babli' fans down," he added.