'83: Deepika Padukone as Romi Dev is All Smiles With Ranveer Singh's Kapil Dev

Deepika Padukone's first look as Romi Dev from Kabir Khan's '83 is finally out! 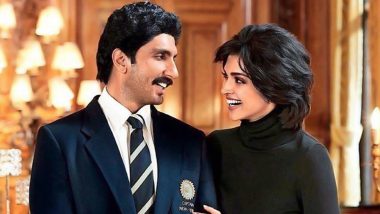 Believe it or not, but Kabir Khan's upcoming directorial '83 is probably going to shatter many box office records this year. The film that revolves around India's historic win at the cricket world cup of 1983 is bound to strike a chord with the audiences and take us back in time to relish the most beautiful memory. While Ranveer had already stunned us with his look as Kapil Dev from '83, here comes Deepika Padukone's first look as Romi Dev from same. Besides being a joint producer, DP will also have a cameo wherein she'll play a reel wife to her real-life husband. '83 First Look: Ranveer Singh and Co are all Set to Relive the Magic of 1983 Cricket World Cup Win (Watch Video).

Deepika's first look was highly awaited as her fans were eager to catch a glimpse of her as Romi Dev. Fortunately, the makers didn't make us wait too long for it. The actress has tried to ape Romi Dev's look with her classic hairdo and the ones who have seen her from those days would be able to judge it better. For us, she's always right and oh-so-gorgeous. "To be able to play a small, but significant part in a film that captures one of the most iconic moments in sporting history has been an absolute honour. Through my mother, I’ve seen closely the role a wife plays in the success of her husband’s professional and personal aspirations. ‘83, for me, in many ways is an ode to every woman who puts her husband’s dream before her own," said Deepika to Bombay Times when asked to describe Romi for us. Ranveer Singh's Resemblance to Kapil Dev's Natraj Shot For 83 The Film Inspires Funny Memes and Jokes.

When Kabir Khan was asked about his decision to cast Deepika, he elaborated on why he always wanted the actress to essay the role. “I have always thought of Deepika as a phenomenal actress and when I was thinking of casting for Romi Dev’s role, I could only think of her. Romi has charming and positive energy and Deepika has captured that with perfection. Her easy chemistry with Ranveer will also help in portraying the relationship that Kapil and Romi share. I’m delighted that Deepika has been such an integral part of our journey," he said to Bombay Times.

You can expect the trailer of '83 to drop online in March first week as the film is slated to release on April 10, 2020.

(The above story first appeared on LatestLY on Feb 19, 2020 08:24 AM IST. For more news and updates on politics, world, sports, entertainment and lifestyle, log on to our website latestly.com).