Amol Palekar's movies can fit any day and age. They never get stale or dated and hence, a lot of his movies got contemporary spins with Salman Khan, Hrithik Roshan, Akshay Kumar in lead among others. On his birthday, let us tell you about a few of them. 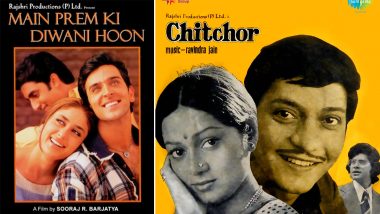 Amol Palekar, our birthday boy's movies weren't spared from being remade. Most of his movies got contemporary spins which although current, go overboard with the treatment most of the time. It's anybody's guess that his quirky movies are the obvious bets here. They say remakes are imitations and that is the strongest form of flattery. When it comes to Bollywood, it's highly unlikely that the OG filmmakers or cast ever felt flattered to see the remakes. Bollywood has a knack for going OTT in everything. Amol Palekar Birthday Special: 10 Movies Of Amol Palekar That Are Delights For Every Movie Buff

What's extremely interesting here is that Palekar's movies are evergreen. They never seem stale or dated. With a bit of tweak, you can fit them in any situation and in every age. Let us tell you how.

Let's get done with the worst first. MPKDH is perhaps the worst remake ever made in the history of Indian cinema. What's funnier is the movie is made by the same producer who made the sweetest love story called Chitchor, Rajshri Films. Palekar played what Hrithik Roshan seemed to be doing in the 2003 movie complete with Valentine's Day games.

Gol Maal, made by Hrishikesh Mukherjee, is sacrosanct because it's so easy to get sucked into the messed-up world of Ram Prasad Sharma and Laxman Prasad Sharma and enjoy thoroughly. Even today unemployment is an issue, the focus of the movie was smartly hidden behind fun gags and the mustache. Bol Bachchan attempted the same and luckily, it was at least hilarious.

A couple is distraught to see the state of several families and thus, decide to help them all out. Palekar played an alcoholic person with a very attractive and vocal wife. Yes, Govinda and Juhi Chawla did try to replicate the problem-solver couple, played by Sanjeev Kumar and Rakhee in the original, which was mildly successful, if you ask us.

Many who have seen both would find it a little difficult to see the similarity here, don't worry we got you covered. In BBM, the basic premise is of getting a middle-aged man to get married as soon as possible, and he tries to fit in with an outgoing young girl. Partner too talks about getting an aging man dying to be in a relationship and someone helps him. Yes, Partner is a copy-paste of Hitch but there's a lot of similarity between the two.

A call to a wrong number creates a lot of chaos for Babu Bhaiyya, Shyam and Raju's already chaotic life. A little girl gets kidnapped and ends up with them while the real kidnappers ask for ransom in return. A comedy of errors basically which was also seen in Palekar's Do Ladke Dono Kadke where two petty thieves end up with the child which was supposed to be kidnapped by others. We wonder if the makers know that it has vast similarities with Palkar's movie.

Meri Biwi Ki Shaadi is about a man overhears a doctor talking about a patient being terminally ill, thinks it to be himself and decides to get his wife married off. Something similar happens in the Akshaye Khanna, Ayesha Takia and Mallika Sherawat film Shaadi Se Pehle. Coincidence much? Don't think so!

(The above story first appeared on LatestLY on Nov 24, 2020 09:40 AM IST. For more news and updates on politics, world, sports, entertainment and lifestyle, log on to our website latestly.com).