Andaz Apna Apna: A Twitter User Proves Aamir Khan And Salman Khan Were Not Lying About Their Stores (View Pics)

Andaz Apna Apna is a favourite of an entire generation and so, we take everything about it very seriously, even the lies told by Amar, played by Aamir Khan and Prem, played by Salman Khan. Remember the scene where they name drops about stores to fake flaunt how rich they are? Those stores are very real! 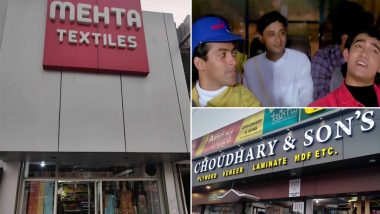 Andaz Apna Apna is not just a cult classic, it's what happens when you get really creative with comedy and have the ability to make people laugh without the cliched slapstick comedy. We fans of the movie know every scene and dialogue by heart. Do you remember the scene where Amar Aka Aamir Khan and Prem Aka Salman Khan lie through their teeth about what store they own? Turns out they weren't lying after all. Chaudhary and Sons and Mehta Textiles really exist! Lionel Messi-Cristiano Ronaldo’s Interview and Salman-Aamir Khan’s Famous Dialogue From Andaz Apna Apna Mashup Will Leave You in Splits! Watch Funny Video

A Twitter user has solved this mystery by sharing the image of stores with the same names that Amar and Prem dropped to flaunt how rich they are. We did some digging. Chaudhary & Sons is a store in Jaipur dealing in plywood while Mehta Textiles is a fabric retailer in Bareilly. Check it out here...

No comments. Only Amar Prem😂 pic.twitter.com/WzeIps4EEa

Now just to jog your memory, here's the scene from Andaz Apna Apna

Now we wonder if Gogo ji ka ghagra actually came from Mehta Textiles. Many remember this scene more for the man sitting behind Aamir and Salman in the bus who apparently looks similar to Shashi Tharoor. Now you have a different reason to believe in Amar Prem's lies.

(The above story first appeared on LatestLY on Mar 02, 2021 01:14 PM IST. For more news and updates on politics, world, sports, entertainment and lifestyle, log on to our website latestly.com).