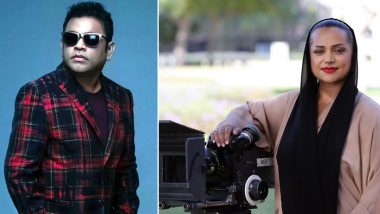 The first woman filmmaker in the United Arab Emirates, Nayla Al Khaja is teaming with Oscar-winning Indian composer A.R. Rahman for her upcoming feature film Baab. Rahman added: "I'm delighted to be working with Nayla on her feature film Baab, she's a passionate and promising filmmaker and an important creative voice within the Gulf region. The script is enigmatic, thought-provoking and promises to be both visually and emotionally engaging for universal audiences. I'm looking forward to the journey." Cannes 2022: Pooja Hegde, Akshay Kumar and AR Rahman To Walk the Red Carpet at 75th Film Festival Opening Day.

Written by Al Khaja and Masoud Amralla Al Ali, the film follows Wahida, who is unable to make sense of her twin sister's mysterious death and is plagued by a haunting rhythm in her ears. She discovers hidden cassette tapes and her relentless pursuit of the truth begins to untangle unresolved grief taking her deep into the mountains to delve into the complexities of the human soul, reports 'Variety'. Cobra Song Adheeraa: This Cool Number From Chiyaan Vikram’s Film Composed By AR Rahman Is Sure To Leave You Spellbound (Watch Video).

The film will begin shooting in March 2023 in the northern Emirate of Ras Al Khaimah, which will provide the film's backdrop of dramatic vistas of the Jais mountains and will cast indigenous people from the region for authenticity. Al Khaja said: "My grandmother came from the mountains, they have never been captured in a feature before, the sheer access to the indigenous people of Ras Al Khaimah and the soulful script is an untold story that I am eager to tell. With A.R. Rahman on board, we will live a very immersive journey that is authentic, haunting and real."

Al Khaja is known for her shorts including Malal and The Road to Fulfilment. She is making her feature debut with 'Three', which is scheduled to go into production during later this year. She is also attached to executive produce and potentially direct episodes of The Alexandria Killings. Rahman recently set up the Firdaus Studio as part of Expo 2020 Dubai and mentored the Firdaus Orchestra, an all-woman ensemble of 50 musicians from 23 Arab countries, reports 'Variety'.

(The above story first appeared on LatestLY on May 11, 2022 04:25 PM IST. For more news and updates on politics, world, sports, entertainment and lifestyle, log on to our website latestly.com).