Badhaai Do: Netizens Ask Why Makers Of Rajkummar Rao–Bhumi Pednekar Starrer Had To Show The Entire Film In The Trailer

Badhaai Do is the upcoming family entertainer starring Rajkummar Rao as a cop and Bhumi Pednekar as a physical education teacher. The makers dropped the film’s trailer today and check out what netizens have to say. 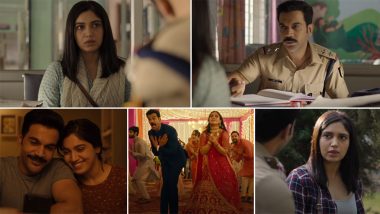 Badhaai Do is the upcoming family entertainer starring Rajkummar Rao as a cop and Bhumi Pednekar as a physical education teacher. The makers dropped the film’s trailer today and it showcased how Bollywood is once again set to explore the LGBT space. The film is directed by Harshvardhan Kulkarni and it promises to be an entertaining ride. Earlier when the makers had dropped the poster featuring the lead pair, it featured them dressed as a bride and groom and the two had covered each other’s mouths. Well, the trailer has revealed the secrets behind the posters and netizens are not that impressed. Badhaai Do Trailer: Rajkummar Rao And Bhumi Pednekar Play A Closeted Couple In This Entertaining LGBT Film (Watch Video).

The trailer of Badhaai Do showcases Rajkummar Rao and Bhumi Pednekar as a closeted couple. Closeted people are the ones who have not disclosed about their sexual orientation. They are the ones who are trying to hide about their sexuality owing to societal pressures. Now the trailer of Badhaai Do drops a glimpse that Rao is a gay and Pednekar is a lesbian and they end up in a lavender marriage. After watching the film’s trailer, some of them commented asking why the makers had to show the entire film. Some even said as there’s no more secret pending to be revealed, Badhaai Do could be a box office failure. Some of the Twitter users even cited that Bollywood should get over the same kind of drama. Take a look at some of the tweets below:

#BadhaaiDoTrailer looks ENTERTAINING!! However a question to whoever has cut the trailer..WHY you need to show the whole film, all the major conflicts, best jokes and even best dance moves in trailer itself? Now even if I skip #BadhaaiDo film, it doesn’t make any difference! 🙏🤷

Oops.. Will It Be A Box Office Failure?

Some Know The Twist Already

Initially I thought #BadhaaiDo is another Rajkumar Rao movie where a lesbian girl is forced to be with him.

But the twist in the end was intresting.

Will It Be A Better Film?

Badhaai Do trailer dropped. The same trope, the same small town and then the same social messaging, there is nothing new in it. But hopefully the film is better than the trailer.#BadhaaiDoTrailer

Watch The Trailer Of Badhaai Do Below:

Badhaai Do also features Seema Pahwa, Sheeba Chaddha, Nitesh Pandey among others in key roles. The film produced under the banner of Junglee Pictures is slated to be released in theaters on February 11.

(The above story first appeared on LatestLY on Jan 25, 2022 01:03 PM IST. For more news and updates on politics, world, sports, entertainment and lifestyle, log on to our website latestly.com).