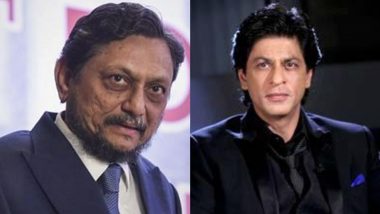 The Ram Mandir-Babri Masjid dispute is one of the longest historical controversies in India, which resulted in the building of the Ram temple and also gave Muslims an alternative land for a mosque. Having said that, an anecdote from the past was out in today's (April 23) virtual farewell for Justice Bobde wherein Vikas Singh, the president of the Supreme Court Bar Association, revealed how SA Bobde wanted Bollywood superstar Shah Rukh Khan to mediate the Ayodhya temple-mosque dispute. Yes, you read that right! Ayodhya Verdict Aftermath: 7 Bits of Deep Homework Done by Sadhu Samaj on Ram Mandir Trust After SC Delivers Historic Judgment on Land Dispute Case.

Singh while giving tribute to Justice Bobde expressed how SRK's name was on the cards for which the actor had also even given a green signal. "While he was in the initial stage of Ayodhya hearing, he was of firm view that the problem could be resolved through mediation. He asked me if Shah Rukh Khan can be a part of the committee. I asked and he was more than willing. Unfortunately mediation did not work," Mr Singh said in the online meet. Ayodhya Verdict Highlights: Key Points From Supreme Court Judgment on Ram Janmabhoomi-Babri Masjid Title Dispute.

For the unaware, SA Bobde was the part historic verdict in the Ram Mandir-Babri Masjid dispute, which comprised of the five-judge Constitution. It was in the year March 2019, when the Bench had cited Ayodhya's dispute to a mediation panel. However, it was on November 9, 2019, when the verdict was served. Stay tuned!

(The above story first appeared on LatestLY on Apr 23, 2021 08:35 PM IST. For more news and updates on politics, world, sports, entertainment and lifestyle, log on to our website latestly.com).