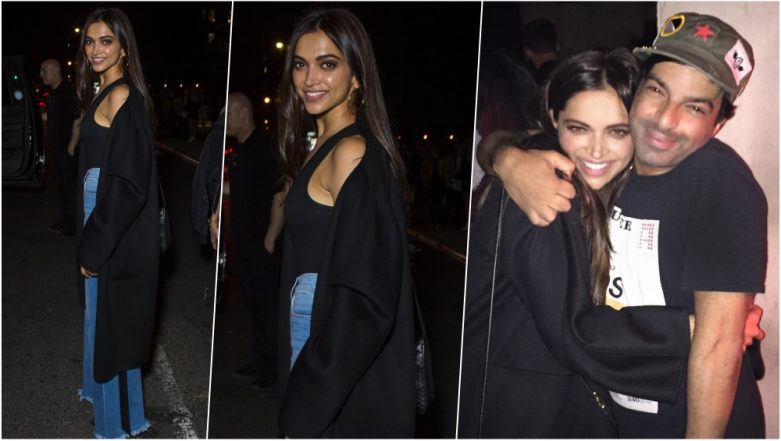 2018 Met Gala is all to take place on May 7 Metropolitan Museum of Art, New York City, United States and before the celebrities put on their quirkiest best outfits, they all gathered to have a gala time at a Pre-Met Gala Party. The Harry Josh Pro Tools 5th Anniversary Celebration was organised at a Public Hotel on Saturday as a part of pre-Met Gala bash saw celebs loosen up before they walk the red carpet on Monday. Bollywood actress Deepika Padukone was one of the star attractions at the party.

Deepika chose a comfy-cool ensemble with no compromise on the glam factor to attend the pre-Met Gala party. She wore a black tank top with high-waisted blue flare denims that had black side stripes. The 32-year-old carried a black overcoat to complete her casual yet stylish OOTD. In hair and makeup department, she let her hair loose while opting for an evening makeup – dark eye makeup, subtle powder, highlighter without getting too dramatic with lip colour. Here’s a look at Deepika Padukone from NYC Party in pictures.

Keeping it Simple and Chic

Part 2 of the BEST night celebrating 5️⃣ years of #HarryJoshProTools! Here are a few of our favorite moments and THANK YOU to everyone for coming!!! 💃🏽💥 It truly was a night to remember! We 💙 you!#HJPro5Years

After Deepika’s first pictures from the event, we are waiting with bated breath to see her outfit at Met Gala also known as “the Oscars of the East Coast”. The actress had wowed everyone with her red-carpet appearance previous year when she stepped out in Tommy Hilfiger satin gown. It had gone on to become one of the most Googled outfits from the Met Gala night. We are sure Deepika will be at her dazzling best this year as well.