Deepika Padukone and Karan Johar are mostly collaborating for a project together. Yes, the prospect already sounds exciting. 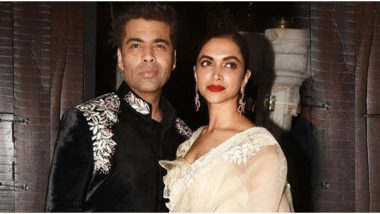 Is Deepika Padukone on a signing spree? Well, it sure seems so. The actress who took a year-long break post the release of Sanjay Leela Bhansali's Padmaavat was then excited to announce Meghna Gulzar's Chhapaak as her new outing. The movie will see the actress play Lakshmi Agarwal, an acid-attack victim who became an inspiration to so many. While the feeling of DP signing a sort of biopic was yet to sink in, she announced her cameo appearance in Ranveer Singh's '83 and then her attempt to play Draupadi in Mahabharat. If these announcements weren't enough to satiate her as an actress, she may soon collaborate with Karan Johar for his next. It’s Ajay Devgn vs Deepika Padukone, AGAIN! Golmaal Five and Mahabharat to Clash on Diwali 2021?

It's been too long since Deepika played a lead in any of Dharma movies. While the director is always keen on roping her as his heroine, the film scripts don't sound promising enough to her. However, seems like a deal is finally struck this time and the actress is already on board for it. As per a report in Filmfare, the Bajirao Mastani actress will play the lead in Johar's next project which will be directed by Shakun Batra. It's a women-centric movie and will star another female lead. Deepika recently heard a narration at the filmmaker's office and was in love with the script. Meanwhile, the hunt for the second female lead is still going on. Deepika Padukone Is Already Hunting For Her Next Hollywood Film After xXx: Return of Xander Cage?

Shakun Batra has movies like Kapoor & Sons, Jaane Tu... Ya Jaane Na and Ek Main Aur Ekk Tu in his kitty. Deepika's inclusion will only boost his filmography and with Karan Johar having his back, we don't see any reason why he should hesitate in exploring some challenging content. Here's looking forward to their official announcement.

(The above story first appeared on LatestLY on Dec 05, 2019 09:42 PM IST. For more news and updates on politics, world, sports, entertainment and lifestyle, log on to our website latestly.com).