Did You Know Malignant Actress Annabelle Wallis Made Her Acting Debut With Amitabh Bachchan? (Watch Video)

Malignant actress Annabelle Wallis debuted with a Bollywood movie. Yes, you read right. The movie is titled Dil Jo Bhi Kahey and starred Amitabh Bachchan in a key role. It was adapted from the Mauritian series C'est La Vie and released in 2005. 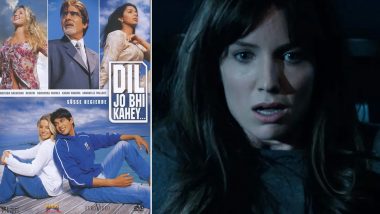 The Malignant trailer is giving everybody nightmares and it's just the trailer. The killer is out to get the protagonist who seems to have a strange connection with it. The moments in the trailer made our hair rise at the back of our necks. But then you don't expect anything less from James Wan who directed The Conjuring and Saw. But what will come as a surprise to you is the actress in the film, Annabelle Wallis made her film debut with an Amitabh Bachchan film and that too in Bollywood. Malignant Trailer: Sleepless Nights Guaranteed In This Creepy James Wan Movie (Watch Video)

The film in question is title Dil Jo Bhi Kahey which had released in the year 2005. The film also starred Bhumika Chawla and was the debut vehicle of Karan Sharma, the son of the producer of Hum, Romesh Sharma. It was adapted from Sharma's Mauritius series C'est La Vie, also starring his son. Ranveer Singh Drops GOAT Emoji on Amitabh Bachchan’s Pic from Kaun Banega Crorepati 13 Sets

Here's a glimpse of Wallis in Dil Jo Bhi Kahey...

Now check out the trailer of Malignant

Wallis has been part of several Hollywood movies from Body Of Lies, X-Men: First Class, Snowhite And The Huntsman, Annabelle and many more.

(The above story first appeared on LatestLY on Jul 21, 2021 05:11 PM IST. For more news and updates on politics, world, sports, entertainment and lifestyle, log on to our website latestly.com).