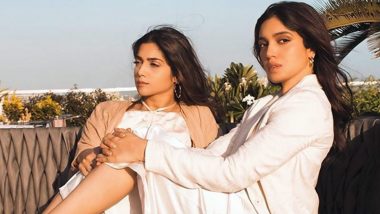 We had the best time together in Busan. We've now made a plan to watch the movie again and it will be our special sister screening!" she said. The film is directed by Alankrita Srivastava and also stars Konkona Sen Sharma. The two actresses play sisters in the film. "The film celebrates womanhood and sisterhood and I couldn't think of a better way to watch the movie. Dolly Kitty Aur Woh Chamakte Sitare Trailer: Bhumi Pednekar and Konkona Sen Sharma’s Next Looks Wild, Crazy But Also Emotional and Empowering (Watch Video)

Samiksha and I are similar yet poles apart just like Dolly and Kitty and it would be amazing to get her feedback for this special gem of a film of ours. It will be a true-blue sister screening and I'm really excited to have this moment with her," said Bhumi.

(The above story first appeared on LatestLY on Sep 17, 2020 12:26 PM IST. For more news and updates on politics, world, sports, entertainment and lifestyle, log on to our website latestly.com).