Father’s Day Special: Karan Johar Is Playing Rapid Fire With Kids Yash and Roohi, at Least We Felt So After Watching This Adorable Video!

Hearing the pure joy in Karan’s voice and innocence of his darling kids, the netizens could not contain their excitement. 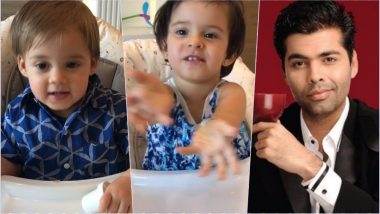 We know there’s still some time left before Karan Johar returns with his controversial yet popular chat show, Koffee With Karan Season 6 but it looks like the filmmaker is already excited to don the host’s hat. And the first guests on KJo’s show is none other than his children, twins, Yash and Roohi. Celebrating Father’s Day 2018, Karan Johar posted a video on his Instagram handle and just like he plays the famous ‘Rapid Fire’ (quick round of question-answer) session on his talk show, Karan is asking his cuties to say something on Father’s Day. Seeing cute reactions of Karan’s son and daughter, we just like his other followers are going gaga over it. Father's Day 2018: Shah Rukh Khan, Akshay Kumar, Ranbir Kapoor Share Adorable Posts on Social Media To Celebrate The Occasion.

Karan joined the bandwagon of celebrities sharing ‘Happy Father’s Day’ posts on Instagram on behalf of their tiny tots. The multifaceted personality who is a single father after becoming a parent of with twins Yash and Roohi born via surrogacy on February 7, 2017. Just like any parent, his life revolves around his kids, and it is too adorable for words. Take, for instance, his latest post on Father’s Day celebrated on June 17, 2018. The Ae Dil Hai Mushkil director writes, ‘Happy Father’s Day to me!!!!’ followed by a string of hearts. If you find the caption so interesting, wait till watch the papa and his babies in the video. Sunny Leone Shares Perfect Family Picture on Father’s Day: Actress With Husband Daniel Weber With Children Nisha, Asher and Noah Look So Adorable Outside Gurudwara!

The video starts with Karan in typical Koffee With Karan host mode saying, “Alright can’s expect you to say Happy Father’s Day but at least say something [sic]’ to an awwdorable Yash who is busy speaking gibberish. The little munchkin is munching on his snack along with his twin sister Roohi sitting cosily on the baby chair. After failing to make a disinterested Yash utter anything, Karan turns his focus and camera to his daughter Roohi who gives him a smile, making Karan break into a giggle. Karan is happily heard saying, ‘Chalo, we have got some reaction,’ and adding, ‘Happy Father’s Day to you my two beauties’. Karan comes back to Yash again with same demand and this time around the boy gives a big broad smile, almost a laugh making Karan and our day.

Hearing the pure joy in Karan’s voice and innocence of his darling kids, the netizens could not contain their excitement. The comments section is full of positive messages for Karan with people calling him best father, and that he deserved all the happiness in the world. Apart from Karan, many celebrities including his close friend and superstar actor Shah Rukh Khan shared a handmade greeting card made by his youngest child, AbRam on his Instagram handle. We wish every daddy, a very Happy Father’s Day!

(The above story first appeared on LatestLY on Jun 17, 2018 04:48 PM IST. For more news and updates on politics, world, sports, entertainment and lifestyle, log on to our website latestly.com).