Good Luck Jerry: Janhvi Kapoor Is a Pro at Playing Cricket and This Video Is a Proof (Watch)

In the video, we see Janhvi dressed in a simple kurta pyjama look, similar to the look from the picture she posted when she announced that she is a part of the film. 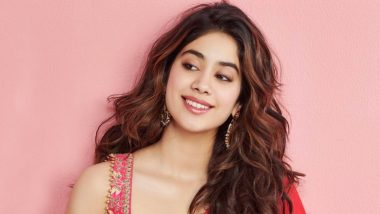 Janhvi Kapoor has been quite busy with all the projects she has at hand. The actress is currently shooting for Aanand L Rai's Good Luck Jerry in Chandigarh currently and have been spending her free time with the crew on the sets of the film. Yesterday, the actress decided to knock over some sixes and fours as she played cricket with the crew members after pack up. She took to Instagram to share a few videos of her playing the sport where she went on to call herself a pro a well. Good Luck Jerry: Janhvi Kapoor Steps Into a Desi Avatar for Aanand L Rai’s Next.

In the video, we see Janhvi dressed in a simple kurta pyjama look, similar to the look from the picture she posted when she announced that she is a part of the film. Janhvi has worn a black sweater over the outfit and has her hair is tied in plaits. She is seen holding a bat and asking the bowler to bowl. She misses the first ball but then quickly grasp the trick to hit the ball. She then shoots the ball far away from her bat, leaving everyone impressed. Janhvi is also seen jumping with joy as she manages to hit the ball properly. Check out the video here:

Earlier, when the crew was shooting for Good Luck Jerry in Bassi Pathana, a group of farmers halted the shoot of the film insisting that Janhvi makes a comment on the ongoing farmers' protest for them to go away. Janhvi then had even posted a story showing her support to the ongoing protest. Something very similar happened again when the crew was shooting in in Patiala. The protester had even reached to their hotels to ask for support. Good Luck Jerry: Farmer Group Halts Janhvi Kapoor's Film Shoot, Filming Resumes After Assurance of Support to Protesters.

(The above story first appeared on LatestLY on Jan 31, 2021 02:49 PM IST. For more news and updates on politics, world, sports, entertainment and lifestyle, log on to our website latestly.com).