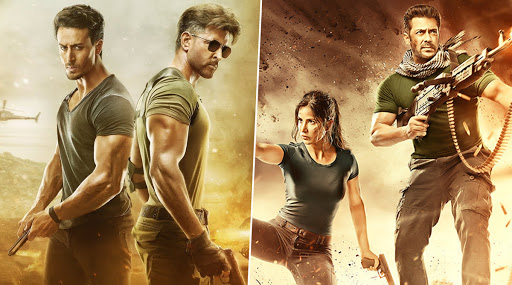 Hrithik Roshan and Tiger Shroff's War released on October 2 and has set the box office on fire. It scored the highest first day numbers ever with Rs 53.35 crore and now within 7 days, has managed to cross the Rs 200 crore mark. As per early estimates, the film has made Rs 215 crore which means it has defeated Salman Khan's Tiger Zinda Hai at the box office which had earned Rs 206.04 crore in its opening week. War Box Office Collection Day 7: The Action Film Becomes Tiger Shroff's Biggest Hit And His First Rs 200 Crore Film

War earned approximately Rs 27 crore on Tuesday which was Dussehra. That helped it smoothly enter the Rs 200 crore club. The film will continue to earn more as there is no big competition at the theatres. If it sustains till Diwali, War will become one of the biggest hits of 2019.

As per experts, War would have done much better had it not clashed with Sye Raa Narsimha Reddy and Joker.

If there had been no clash #Joker & #SyeRaa , #WAR First week (7 days)Hindi collection would have been in excess of ₹ 220 cr nett.

Now it remains to be seen how much the film earns in its entire run. Our bet is War will end its glorious run at the box office by earning Rs 275 crore or more. What do you think?