Talking in specific about the Hindi film industry, Ilayaraja has scored music for a very few Bollywood movies, which turned out to be hit. And on the occasion of the maestro's 78th birthday today (June 2), let's take a look at the five Hindi songs composed by him. Read on. 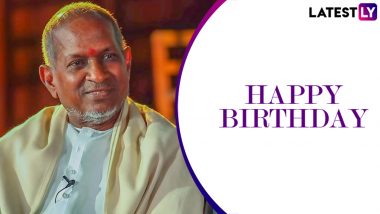 Legendary music composer Ilayaraja celebrates his birthday today (June 2). The iconic star has many superhit albums and honours to his credit, which echoes his passion for his work. Having predominantly worked in the South industry, the composer has also churned hits for films in other languages too. Talking in specific about the Hindi film industry, Ilayaraja has scored music for a very few Bollywood movies, which turned out to be hit. And on the occasion of his born day, let's take a look at the five best Hindi songs composed by the maestro. Nargis Birth Anniversary: 7 Popular Songs of the Legendary Actress Sung By Lata Mangeshkar!

The maestro entered the Hindi film industry by scoring Aye Zindagi for Kamal Haasan and Sridevi's Sadma. This particular song from the 1983 movie is one of his greatest works and is still is fan favourite.

Another song from the movie Sadma, this one is soothing to the ears. The melody depicts both happy and melancholic moods of the leads beautifully. Technically lullaby, this track composed by Ilaiyaraaja is just amazing.

Just put on the earplugs and listen to the composition of this song from Paa (2009), and we bet you will be transported to another world altogether. The movie stars Amitabh Bachchan, Abhishek Bachchan, Vidya Balan.

This is one of the most loved and offbeat songs of Big B from Shamitabh (2015), composed by Ilayaraja. Not just this film, the composer has worked with filmmaker R Balki in Paa, Shamitabh and Ki & Ka.

That's it, guys! These are some of the evergreen tracks scored by the legendary who has turned 78 today (June 2). A Padma Vibhushan awardee, he has come a long way since his debut Tamil album Annakkili in 1976. Recently, the veteran composer was in the news for opening his new music studio in Chennai. Happy birthday, Ilayaraja.

(The above story first appeared on LatestLY on Jun 02, 2021 04:04 PM IST. For more news and updates on politics, world, sports, entertainment and lifestyle, log on to our website latestly.com).