June 1 marks the birth anniversary of the iconic actress Nargis. And in her memory, let's take a look at some of her popular songs that will surely take you back on time and make you nostalgic. Watch! 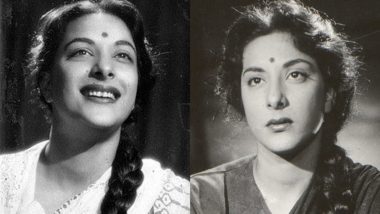 One of the greatest actresses in the history of Indian cinema, Nargis celebrates her birth anniversary today (June 1). Wife of late actor-politician Sunil Dutt, she made her screen debut at the adolescent age of five. With a career that spans three decades, there's never been anyone like her ever. The emotions which she used to bring on the big screen were impeccable and that’s one of the reasons why she’s still remembered by millions. She was one of the leading stars during her era and gave many commercially as well as critically acclaimed hits. And today, in her memory, we would like to list down some of her popular songs that will surely take you back on time and make you nostalgic. P.S: all the songs are sung by Lata Mangeshkar. Nargis Birth Anniversary: Sanjay Dutt Says 'Miss You Ma' As He Shares a Beautiful Video Post Remembering His Mother.

From the film Andaz (1949), this song of Nargis was quite popular. It basically focused on the plight of the actress and what her character was going through in the film. This one is sung by Lata Mangeshkar and the movie saw Raj Kapoor and Dilip Kumar in brief roles.

This particular song was a massive hit and is from the movie Awara (1951). The melody saw Nargis singing ‘Ghar aaya mera pardesi, pyaas bujhi meri akhiyan ki,” in a dream sequence alongside Raj Kapoor. It’s sung by Lata didi.

Nargis, Lata, and Raj Kapoor proved that they had a Midas touch and this song was proof. From the film, Aah (1953), the track described the emotion of longing in the best way possible. And the actress nailed it with her expressions in each frame.

Our list is incomplete if we don’t mention this rain duet song of Nargis and Raj Kapoor. Right from the lyrics, the actors to Lata and Manna Dey’s vocals, this one is still a fan favourite monsoon melody and how. It’s from the film Shree 420 (1955).

Romantic songs in those times were not like the ones we have now. From the film Chori Chori (1956), this ballad saw Nargis and Raj Kapoor expressing their love for each other. It’s a soothing track and a must-add to your playlist if you’ve fallen for someone. Watch!

Nargis and Raj Kapoor are superb in this fun melody. Both are seen dancing, expressing, and also acing the puppet steps, which was an achievement of sorts during those days. It’s sing by Lata and is from Chori Chori (1956).

Last on our list is this song from Shree 420 (1955) that’s quite famous. In the melody, Nargis could be seen teaching students Hindi alphabets by going to the Ichak Dana Bichak Dana way. A delightful track that will bring a smile to your face.

That’s it! These are some of the top seven Nargis songs that come to our minds when we think of the legendary actress. She passed away in 1981 due to pancreatic cancer, only three days before her son Sanjay Dutt's film debut. Well, she may not be between us but her work will forever be etched in our hearts. Stay tuned!

(The above story first appeared on LatestLY on Jun 01, 2021 08:20 AM IST. For more news and updates on politics, world, sports, entertainment and lifestyle, log on to our website latestly.com).