International Meatless Day 2020: Manushi Chillar Reveals How Being a Vegetarian Makes Her Feel Fitter and Healthier 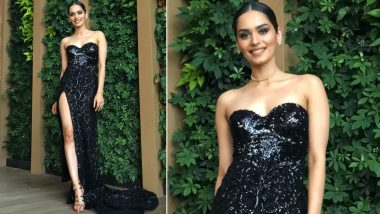 Actress Manushi Chillar says being a vegetarian is more of a personal choice for her, and shared that it makes her feel fitter and healthier. On International Meatless Day, Manushi said: "For me, being vegetarian was more of a personal choice. It has been and will always be a way of life for me because my parents are vegetarians and I have inculcated this through them. However, they never forced this on me. I made my choice after I realised that it suits me remarkably and makes me feel fitter and healthier." SAK Meatless Day 2020 Date, History & Significance of Day Observed on Sadhu Vaswani Birth Anniversary: Know More About International Vegetarian Day and the Benefits of Quitting Non-Veg Food

Manushi, who will enter Bollywood in 2021, says she enjoys eating clean. "I have since then believed in eating clean and I have realised over the years that a plant based diet works better for me. I can't point out one negative to eating like this. I'm a firm believer of this diet and I would recommend it to people who would want to try it out and see if they feel different after being on it. Being a vegetarian is an integral part of my life and I have realised multiple benefits due to my life choice," she revealed. Happy Birthday Manushi Chillar: 8 Fascinating Facts About the Former Miss World That You May Not Have Known

Manushi will make her Bollywood debut opposite Akshay Kumar in the upcoming historical drama, "Prithviraj". "Prithviraj", based on the life and heroism of Prithviraj Chauhan. The film is directed by Dr. Chandraprakash Dwivedi, who helmed television epic "Chanakya" and the period drama "Pinjar".

(The above story first appeared on LatestLY on Nov 25, 2020 05:22 PM IST. For more news and updates on politics, world, sports, entertainment and lifestyle, log on to our website latestly.com).