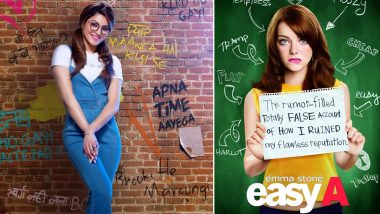 Actress Urvashi Rautela's "Virgin Bhanupriya" is set to release soon, and she says a lot of people are curious if her film is "inspired" by Hollywood star Emma Stone's movie "Easy A". "Easy A", a 2010 American comedy film, is about Olive, who lies to her best friend about losing her virginity to one of the college boys. A girl overhears their conversation, and soon her story becomes talk of the town, Talking about her film, Urvashi told IANS: "It is both comedy and drama, it is one of those films which the current youth will completely relate to. People these days like high content cinema, so it is one of those films. It is a family comedy film which explores the relationship between the family and the youth." Urvashi Rautela’s Virgin Bhanupriya Is Slated for July 16 Release on ZEE5.

"A lot of people are asking me if this film is kind of inspired by Emma Stone's film 'Easy A', but I will completely leave it up to their imagination and they'll get to know the story once they see the film," she said and added that her look is also "completely youthful, like that of a college-going girl". Urvashi Rautela Grateful to Represent India in Her International Debut Film ‘Aislados’

"Virgin Bhanupriya" will open directly on an OTT platform on July 16. The film's team recently had a virtual meeting. "We had Archana Puran Singh. She is playing my mother in the film, and we had Gautam Gulati. This is my first film where we launched a trailer by being at home. There were a lot of fan questions from all over the world, and they wanted to know more about the film, my character and the story," she said.

(The above story first appeared on LatestLY on Jul 01, 2020 12:02 PM IST. For more news and updates on politics, world, sports, entertainment and lifestyle, log on to our website latestly.com).