A few days back, there were reports of how after Andhadhund filmmaker Sriram Raghavan decided to pursue another film with Katrina Kaif and Vijay Sethupathi. And the film and its casting has been confirmed. 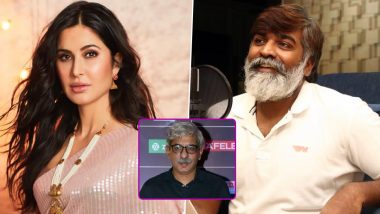 Aaannnndddd its confirmed! A few days back, there were reports of how after Andhadhund filmmaker Sriram Raghavan put his Varun Dhawan film on hold, decided to pursue another story with a rather unusual pairing - Kartina Kaif and Vijay Sethupathi. And now, as per reports, the film and its casting has been confirmed. “It is true, though premature to talk about it as many issues have to be sorted out," said Sriram Raghavan himself to SpotboyE. Vijay Sethupathi And Katrina Kaif Team Up For Andhadhun Director Sriram Raghavan’s Next?.

The news was first reported by Filmfare wherein they reported about how tight business during the pandemic had forced Raghavan to put his Ekkis with Varun Dhawan on hold. As per SpotboyE, Ekkis has now been pushed to September 2021 as the war biopic has battle scenes that can only be shot in September-October weather. Sriram Raghavan Birthday: From Ek Hasina Thi to AndhaDhun, All Movies Directed by the Acclaimed Filmmaker, Ranked, and Where to Watch Them Online.

While this project already seems to be garnering intrigue amongst Sriram Raghavan fans, the director also has his war biopic Ekkis with Varun Dhawan in the pipelijne, though it has been put on hold for a while. On the work front, while Vijay Sethupathi's Master releases in theatres on January 13, Katrina has Sooryavanshi nect which is ready for release and needs a date.

(The above story first appeared on LatestLY on Jan 13, 2021 11:03 AM IST. For more news and updates on politics, world, sports, entertainment and lifestyle, log on to our website latestly.com).