Luka Chuppi is slated to hit the silver screens on March 1, 2019. 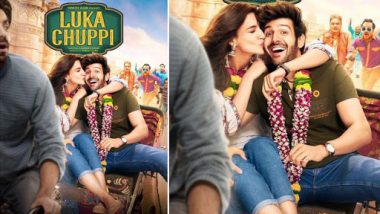 Sonu Ke Titu Ki Sweety star Kartik Aaryan, who enjoys a huge female fan following owing to his chocolate boy looks and loverboy roles, is all geared up for his first collaboration with actress Kriti Sanon. The duo is teaming up for the first time. While we can't wait for Luka Chuppi, Kartik recently unveiled the first poster of his film on his social media handle. On Thursday, the actor took to Instagram to share another poster from the film. Alongside the picture on his Instagram profile, the actor wrote, "Wherever this jodi goes, Family follows 🙄 2 hours to go for the #LukaChuppiTrailer 🤫❤️ @kritisanon #DineshVijan @laxman.utekar @MaddockFilms #PankajTripathi @aparshakti_khurana #VinayPathak @officialjiocinema" Luka Chuppi No More! Kartik Aaryan and Kriti Sanon’s Movie Trailer to Release Tomorrow

The poster features the film's lead pair Kartik and Kriti, who can be seen enjoying a romantic moment while they are riding pillion on a bicycle. The bicycle is ridden by Aparshakti Khurrana, while Pankaj Tripathi, Vinay Pathak can be seen chasing the couple. The poster, much like its title does, seem to be playing a little game of hide and seek and we aren’t sure what they have in store. 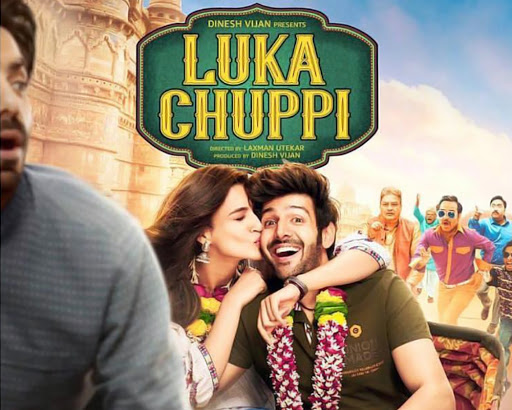 Don’t Kriti Sanon and Kartik Aaryan make for an adorable couple in this new poster of Luka Chuppi?

Helmed by Laxman Utekar, Luka Chuppi is a romantic comedy. It's a story of a television reporter in Mathura, who falls in love with a headstrong woman. Bankrolled by Dinesh Vijan, the film has extensively been shot in Mathura and Gwalior. In the film, Kartik plays a TV reporter while details about Kriti Sanon's character have successfully been kept under wraps. Luka Chuppi is slated to hit the silver screens on March 1, 2019. Watch this space for further updates.

(The above story first appeared on LatestLY on Jan 24, 2019 12:17 PM IST. For more news and updates on politics, world, sports, entertainment and lifestyle, log on to our website latestly.com).