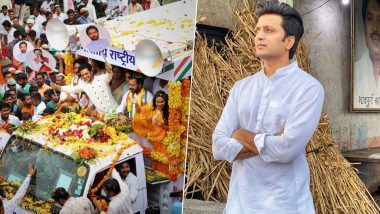 Politics has been a part and parcel of Riteish Deshmukh's growing up days. The actor is the son of late former Chief Minister of Maharashtra, Vilasrao Deshmukh. Although the actor never indulged in politics, his brothers Dhiraj Deshmukh and Amit Deshmukh are actively in politics and have a strong hold over Latur district of the state. Yet again, the siblings who were contesting elections through Indian National Congress, won with a large margin in the district in Maharashtra Elections 2019. Their star brother star congratulated them through this post on Twitter. Riteish Deshmukh on Cutting Trees in Aarey: Each Tree Belongs to Citizens as Much as to Government.

The Housefull 4 star took to the micro blogging site and shared the pictures of the rally that took place after their win. As we can see, the vehicles were decorated with flowers and the actor was in the forefront to celebrate this victory!

In this post, he wrote the details saying, "We did it PAPPA!!! @AmitV_Deshmukh wins Latur (city) by 42000+ votes for the 3rd consecutive time. @MeDeshmukh wins Latur (rural) by 1,20,000 votes. Thank you people of Latur for this faith & trust." The actor has always been emotional about his father and often mentions him in his interviews and on his social media posts. This victory in the family urged him to remember and pay a tribute to the late politician as well. See pictures and post below.

Thank you people of Latur for this faith & trust. pic.twitter.com/pOGFsmoEJU

On the work front, Riteish has two big films lined up ahead. He will be next seen in Housefull 4 franchise along with Akshay Kumar and Bobby Deol. Next, he will be seen playing an antagonist and a dwarf in Sidharth Malhotra-Tara Sutaria starrer Marjaavaan.

(The above story first appeared on LatestLY on Oct 24, 2019 05:58 PM IST. For more news and updates on politics, world, sports, entertainment and lifestyle, log on to our website latestly.com).