Check out the entire list of projects that Netflix India has announced! 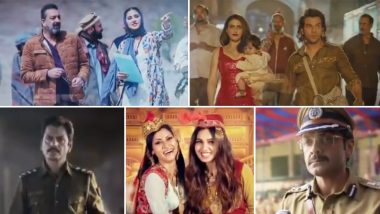 Netflix India has been teasing fans for a while, promising a loaded shower of content. The actors and the streaming platform were using the hashtag #ComeOnNetflix to raise the excitement of the fans. And here it is! A string of projects have been lined up for the fans at once including of films, series and shows. These include a bunch of stellar artists as well as various genres. The promo was released and it sure looks exciting. #ComeOnNetflix: Kajol, Nawazuddin Siddiqui, Janhvi Kapoor and Others Drop Major Hints About their Upcoming Releases on OTT Platform; Big Announcement on July 16.

🚨🚨🚨 We're all set to drop 17 upcoming originals! Are you excited or ARE YOU EXCITED?! 🚨🚨🚨@WeAreNetflix pic.twitter.com/C7g6Iob0Cg

Well, in case you have watched the promo now, you know that there lies one huge binge watch session ahead of you! The line up definitely looks promising. So, which project are you the most excited about?

(The above story first appeared on LatestLY on Jul 16, 2020 10:37 AM IST. For more news and updates on politics, world, sports, entertainment and lifestyle, log on to our website latestly.com).