From Nawazuddin Siddiqui's Raat Akeli Hai to Kajol's Tribhanga - list of upcoming movies that are confirmed to release on Netflix. 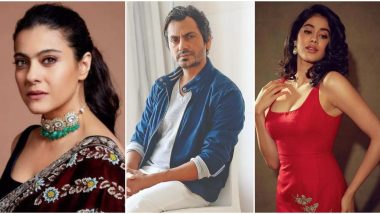 After Amazon Prime made the headlines with its list of upcoming movies releasing on their platform, Disney+ Hotstar followed the suit and Netflix will soon join the same league. The OTT giant is expected to make a major announcement on July 16 and it will include their list of upcoming movies and new series. While we know Janhvi Kapoor's Kargil Girl has already ditched its theatrical premiere and will release on Netflix directly, we weren't aware of its remaining line-up until today. Sanjay Dutt and Nargis Fakhri Starrer Torbaaz to Hit OTT Platform in October 2020?

Currently, actors like Nawazuddin Siddiqui, Kajol, Fatima Sana Shaikh, Sanjeeda and others are dropping major hints about their upcoming releases that are headed for Netflix. We can expect these names to find a place in the platform's huge announcement that's slated to come out tomorrow. Have a look at why #ComeOnNetflix is currently trending on Twitter. Dolly Kitty Aur Woh Chamakte Sitare: Konkona Sen Sharma and Bhumi Pednekar's Next to Premiere on Netflix?

#ComeOnNetflix bhai, it's time for the battle of the best! 💪 pic.twitter.com/62R2wPNMNj

#ComeOnNetflix when is class going to be in session? I've been waiting to give attendance for so long now!

Besides the above releases, Kiara Advani's Indoo Ki Jawaani, Sanjay Dutt's Torbaaz and Parineeti Chopra's The Girl on the Train are also expected to be a part of the announcements.

While Amazon's list included regional releases along with Amitabh Bachchan and Ayushmann Khurrana's Gulabo Sitabo and Vidya Balan's Shakuntala Devi, Disney+ Hotstar announced Laxmmi Bomb, Bhuj; The Pride of India, The Big Bull, Sadak 2, Lootcase and Khuda Hafiz in its list of upcoming productions. Netflix may be last in the race but don't they say, 'last but not the least?'

(The above story first appeared on LatestLY on Jul 15, 2020 06:55 PM IST. For more news and updates on politics, world, sports, entertainment and lifestyle, log on to our website latestly.com).