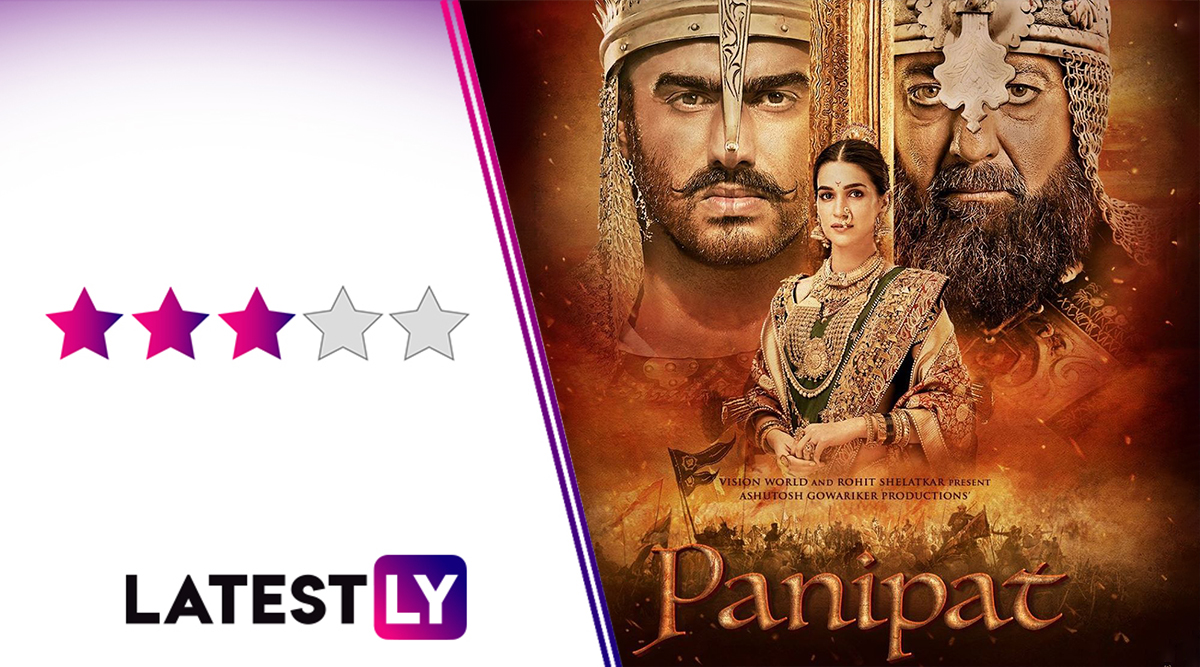 Panipat Movie Review: The Third Battle of Panipat, fought in 1761, was considered as one of the bloodiest battles in Indian history. The might of the Maratha warriors were tested against the fierceness of the Afghani invaders. Although the Maratha army lost the battle, the valour they had shown on the battleground made them heroes for eternity, even earning the respect of the Afghani ruler, Ahmed Shah Abdali (Sanjay Dutt). Ashutosh Gowariker, director of Lagaan, Swades and Jodha-Akbar, wants to recreate this part of history to pay a tribute to those fallen heroes with his new movie, Panipat. Panipat Team Gets Heartfelt Wishes from Aamir Khan.

Especially, the brave Sadashiv Rao Bhau (Arjun Kapoor). The young Maratha Peshwa was considered one of the smartest, bravest generals in his cousin, Nanasaheb Peshwa's (Mohnish Behl) side. At that time, the Maratha Kingdom was at its most powerful, and even the Mughals, weakened by infighting, paid allegiance to them. However, a rogue Rohila chieftain Najib ad-Dawlah (Mantra) convinces Abdali (Sanjay Dutt) to attack India and replenish his depleting treasury, just so that he can humiliate the Marathas

Abdali, who is facing assassination attempts within his own ranks, agrees to do so and marches his army to Hindostan. Nanasaheb sends Sadashiv Rao to protect the North along with his teenage son Vishwasrao (Abhishek Nigam). Sadashiv's wife Parvati Bai (Kriti Sanon) also accompanies him. What follows next is a strategic cat-n-mouse game between the Marathas and Afghanis, filled with skirmishes, deceit and backstabbing, leading to the massive bloodshed near the fort of Panipat.

Before I went to watch Panipat, the first doubt that came to my mind is, will Ashutosh Gowariker manage to regain his Lagaan or Jodha Akbar glory, or will Panipat be another Mohenjo Daro-sized travesty? Well, there is some good news here. Panipat is definitely one of the better efforts by the Oscar-nominated filmmaker, even though it still isn't among his best works. Despite the limitations of the budget, which you can clearly see in the battle scenes and CGI sequences, Ashutosh Gowariker has managed to pull off a rousing war drama, interspersed with some powerful moments.

Even though he has taken many cinematic liberties in retelling the chapter of history, Ashutosh doesn't overshadow the real chain of events just to appease the galleries. Panipat works best when it focuses on the politics and machinations of the rulers of the era, whose infighting and ego clashes caused real harm to the fabric of the country than any invasion. The tactical warfare used by the Marathas in keeping Afghanis at bay, and capturing Delhi in the process, provides some really interesting moments. Some of the dialogues are pretty powerful too. Like when Abdali threatens to take Hindostan first, before going back to Afghanistan, Rao smartly uses his words back at him in what is the film's most applause-worthy moment.

Of course, the Hindu supremacy persists in the film, which is the flavour of the season these days. But it is not just about Hindu valour, Ashutosh has also incorporated some intriguing parallels to two of Hinduism's greatest books, Ramayana and Mahabharata, in the narrative. The terse equation between Sadashiv and Nanasaheb's wife Gopika Bai (Padmini Kolhapure) who is afraid that he may steal the power from her son is influenced by Lord Rama and Kaikeyi's relationship in Ramayana. (SPOILERS AHEAD) Sadashiv Rao's last stand made me recall Mahabharata, that chapter where Abimanyu trapped in the Pradyumna Chakra went down fighting valiantly.

The smartness goes beyond the mythological inferences. During a cutesy domestic spat between Parvati and Sadashiv, she uses a spear, then a sword and then a knife to keep her husband at bay, but fails. Interestingly, even Rao follows the same order of weapons when he battles to his death. Does Panipat mark the return of Gowariker back to his former glory?

Probably, yes, but there is still some work to do. Like the action sequences are not that great, with the film relying on fast camera movements, slo-mo techniques and hazy editing to pull the wool over the eyes. The editing should have been sharper in the middle portions of the film as well, trimming down the runtime, making Panipat reach its impactful third act sooner.

The romance between Sadashiv Rao and Parvati, while has its charming moments, lacks the spiciness that we saw in Jodha Akbar. Especially, in the first half, I felt this track was dragging the film down. Thankfully, the chemistry of the lead actors and the improved writing of this track in the second half made things better. SRK Pose Or Titanic Pose? Kriti Sanon and Arjun Kapoor's Pictures While Promoting Panipat Will Leave You Curious.

The biggest concern I had about Panipat was how the movie will depict the character of Abdali. Will he be shown like the bloodthirsty ravager that Padmaavat showed with Alauddin Khilji, as the trailer of Panipat has suggested? Mercifully, Ashutosh Gowariker has controlled the instinct to make him more barbaric than needed; instead, he presents Abdali as what he is - an invader, who has his own principles and loyalties, even if warped. That said, the film's representation of the Muslim characters is still questionable. Like why do the 'good' Muslims in such films need the validation of a Hindu hero to be called 'good'? Perhaps, that's a debate we need to have for another time.

Speaking about the other aspects, I really missed AR Rahman's score in a Gowariker movie, but Ajay-Atul (who is becoming a staple in period dramas these days) has provided a powerful score for the film. Among the songs, particularly loved the evocative "Mann Mein Shiva" track.

Watch The Trailer of Panipat Here:

The CGI issues aside, Panipat does appeal to the eyes visually thanks to its colourful production values. Though at times, the snarky movie buff in me keeps sniggering 'Bhansali'!

Here's the third big concern I had pre-screening - Can Arjun Kapoor pull off this author-backed role? In the beginning, I felt the actor was struggling to get both his diction and his body language right. With Ranveer Singh's exemplary performance in Bajirao Mastani in my mind, I begin to draw unfair comparisons with both the actors. However, as the movie proceeded, Arjun's performance also improved accordingly, until you start ignoring the clinks in his act and begin to feel that he is getting full command of the performance. Definitely, one of the better acts by the Kapoor scion.

As Parvati Bai, Kriti Sanon is wonderful. She nails the diction far better than her male co-star and is mesmerising in nearly every sequence. I, especially, loved how her character has a substantial role to play in the movie, instead of being a partner waiting for her returning husband.

Sanjay Dutt's commanding screen presence works in the favour of his character, It may not be the best negative role that the actor has done, but he manages to dominate the arena whenever he appears. The scene where his Abdali faces Arjun's Rao in a truce tent is well-enacted by both the stars.

Among the supporting cast, Mohnish Behl, Nawab Shah, Mantra, Abhishek Nigam are highly effective in their roles. Zeenat Aman is just about okay in her cameo appearance as Sakina Begum.

- Some Tropes Could Have Been Avoided

- Editing Could Have Been Sharper

- The Battle Sequences Not That Well-Executed

Panipat is a sort of return to form for both director Ashutosh Gowariker and Arjun Kapoor. As a historical war drama, the film has plenty of moments that will keep you engrossed, and the performances are pretty good. Go watch Panipat to revisit an important chapter in History, albeit with some fine-tuning here and there.