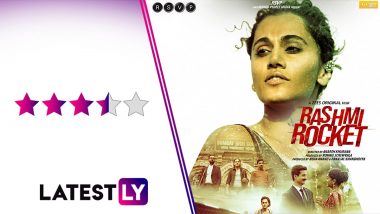 Rashmi Rocket Movie Review: Akarsh Khurana, who made the very likable Karwaan, returns to direct Rashmi Rocket, a sports drama film that is less about on-field exploits but more on the malpractices carried out in the name of rules. The crux of the premise here is around gender tests, a humiliating exercise carried out determine if a female athlete is 'feminine' enough to be eligible for sporting events. As atrocious as it sounds, sex verification tests is a sad reality in sporting events, and Rashmi Rocket tries its best to at least present the flawed nature of these tests and how they carried out. Rashmi Rocket: Taapsee Pannu Opens Up About Her Leg Injury While Shooting for the Film.

The argument is presented through the ordeals of a fictitious character called Rashmi (Taapsee Pannu), though notable real-life sportspersons like Santhi Soundarajan and Duthee Chand have suffered the brunt of it. Rashmi, a girl from Bhuj, Gujarat, is a naturally talented fast runner, which earned her the nickname 'Rashmi Rocket'.

After a traumatic incident in her childhood, she hasn't harbored any sporting aspirations to the disappointment of her strong-willed mother (Supriya Pathak). This changes when Rashmi meets Major Gagan (Priyanshu Painyuli) who is not only instantly smitten with her, but is also impressed by her running skills.

He coaxes her to participate in athletics, and when she does manage to get in the National events, Rashmi rockets aheads of her peers, despite lacking technical finesse. But on the day she won her third gold medal, Rashmi is faced with the most humiliating test of her life - the gender test - that not gets her banned from sporting events but also subjects her to ridicule, media-shaming and even get physically abused by the police.

Rashmi Rocket has a formulaic treatment to its narrative. You know how it starts and how it ends, with the first half - the weaker part of the film - establishing Rashmi's character, and those around her, as well as her rise on the track. These scenes ain't bad, but they are very cloying in nature. Like the scene where Rashmi runs for her trials for the first time. The slo-mo treatment to the scene does it no favours, and we have to take the over-awed expressions of the spectators to get the idea of her speed. Let the audience a part of that too please. In fact, the track scenes only pass muster, surprising for a sports film.

But then Rashmi Rocket isn't a usual sports drama, and the realisations arrives with the dreaded gender test scene, which is well-shot without turning sensationalised.

The second half, going with the formulaic nature, deals with legal proceedings, involving a rookie but committed lawyer Eeshit (Abhishek Banerjee), who fights for Rashmi, and in turn for other female athletes who had been victims of this discriminating law.

The courtroom-drama proceedings are surely filmy in nature, and we do wish our real courts are so efficient, easy and committed in disbursing justice. The film even tries to go meta with this, with the judge (an affable Supriya Karnik) calling out Eeshit's style of argument as filmy, and yet the movie knows that being 'filmy' is what would work here.

It is the 'formula' that helps Rashmi Rocket, written by Aniruddha Guha, get its message across to the viewer. The courtroom drama scenes are the highlight of the film, in not only trying to bring out the politics of the administrative body, but also how archaic the gender test are in essence, despite the frequent argument of them being backed by international sports bodies. For nothing else, at least the movie made a sports ignoramus like me to pause and Google about 'sex verification tests' and the psychological harms they cause to the athlete. Especially how the sports body chooses the 'victim', as I want to call them, based entirely on their whims. I did across a Feminism in India article, which raises some pertinent points that even Rashmi Rocket uses in its arguments (the Michael Phelps example is a common arguing trait in both). So I am glad that a movie like Rashmi Rocket manage to highlight this traumatising feature in a very effective manner.

While the courtroom proceedings are ongoing, it isn't that Rashmi is a mere spectator. The second half also shows how Rashmi tries to get back to the track, despite a certain personal complication that could have hindered her goals. So in being both a legal drama trying to put its point across and in being an inspiring sports saga, Rashmi Rocket do score well in these aspects. The dialogues by Kanika Dhillon also help in lending some deft statements here.

As for the performances, Taapsee Pannu continues her strong show in Bollywood with another adept performance. Ignoring the lack of a Gujarati diction (hard to do so, since the people around her have strong ones), Taapsee nails the physical aspect and the commitment to the role right. She is effective in the emotional scenes, especially the sequence that comes right before the finale. She is also terrific in the scene where she undergoes the test, aptly bringing out the emotional and the mental anguish of the character there. Rashmi Rocket: Taapsee Pannu Reveals the Real Reason Why She Did Akarsh Khurana’s Sports Drama.

As her lover, and later husband, and above all, her biggest support, the talented Priyanshu Painyuli puts in a commanding performance, looking well the army officer that he portrays but with enough sensitivity. Abhishek Banerjee channels some Jolly LLB vibes, but it makes his performance - a crucial part of the second half - all the more engaging to watch. Probably his most massy role, I must say! Supriya Pathak is, as always, fine. Amit Trivedi's music goes well with the narrative.

- The Engaging Storyline That Brings Across an Important Issue

- An Okayish First Half

Like with Taapsee's Thappad, Rashmi Rocket is a film that deserves a watch for it puts across an important issue that affects the morale of our already gender-skewered sports community. It also helps that the film is engagingly made and well-acted, with a few powerful scenes. Rashmi Rocket is streaming on Zee5.

(The above story first appeared on LatestLY on Oct 14, 2021 06:00 PM IST. For more news and updates on politics, world, sports, entertainment and lifestyle, log on to our website latestly.com).