Rashmi Rocket Song Zidd: Taapsee Pannu Says the Track Is the Spirit of Her Character ‘Rashmi’ Who Decides To Fight Against All Injustice (Watch Video) 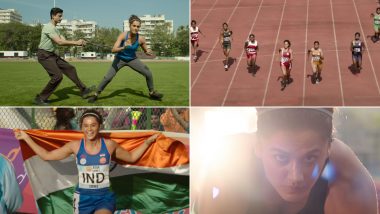 Actress Taapsee Pannu says the song 'Zidd' from her upcoming film Rashmi Rocket is the spirit of her character Rashmi. 'Zidd' is sung by Nikita Gandhi, composed by Amit Trivedi and written by Kausar Munir. The song showcases the spirit of 'Rashmi' who decides to fight against all injustice to protect her respect, honour, and even her identity. Rashmi Rocket: Taapsee Pannu Confirms Release Date of Her Sports Drama With a New Poster; Film to Premiere on ZEE5 on October 15!

Taapsee shared: "'Zidd' is full of energy and the lyrics are spot on. This song showcases the grit and determination of Rashmi who has decided to win against all odds! I would say that this song in a way is the spirit of Rashmi." She added: "Amit Trivedi has a done a wonderful job and it has been beautifully sung by Nikita Gandhi." Rashmi Rocket Song Ghani Cool Chori: Makers of Taapsee Pannu’s Film Release the Teaser of the First Song.

Watch The Song Below:

(The above story first appeared on LatestLY on Oct 05, 2021 05:29 PM IST. For more news and updates on politics, world, sports, entertainment and lifestyle, log on to our website latestly.com).