Riteish Deshmukh remembered his late Father and Ex-Maharashtra Chief Minister Vilasrao Deshmukh on the leader's 75th birth anniversary. The actor dedicated a TikTok video in memory of his dad. 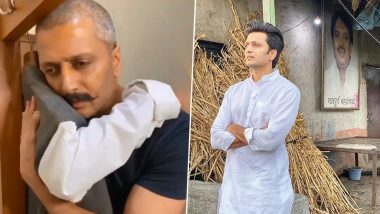 While actor Riteish Deshmukh is one of those Bollywood actors who is quite popular on the controversial social media platform TikTok, with his funny antics, his latest TikTok upload is not one of those. In fact, Riteish's latest video is in memory of his late father and ex-Maharashtra Chief Minister Vilasrao Deshmukh, who passed away in 2012. And May 26, 2020, marks the late leader's 75th birth anniversary. Maharashtra Elections 2019: Riteish Deshmukh Remembers Father Vilasrao Deshmukh After His Brothers Win Seats in Latur (View Pics).

And in an emotional dedication to his father, Riteish was seen hugging his father's bandhgala attire, that was Vilasrao's trademark clothing of choice for when he was in the Office. Riteish Deshmukh Wants to Make a Biopic on His Late Father Vilasrao Deshmukh, Says ‘His Journey From a Sarpanch to the CM of a State Deserves a Film’.

In the video, Riteish can be seen remembering his father with his picture in the background. Vilasrao Deshmukh served as the Chief Minister of Maharashtra for two terms, first from October 18, 1999 - January 17, 2003 and once again from November 01, 2004 - December 4, 2008. He was diagnosed with cirrhosis in 2011 and was diagnosed with liver and kidney failure in 2012. He was flown down to Chennai for a liver transplant but passed away on August 14, 2012, due to multiple organ failure in the presence of his family.

(The above story first appeared on LatestLY on May 26, 2020 11:39 AM IST. For more news and updates on politics, world, sports, entertainment and lifestyle, log on to our website latestly.com).