Akshay Kumar starrer Sooryavanshi's trailer to be out on March 2 and will be attended by Ranveer Singh and Ajay Devgn. Check it out! 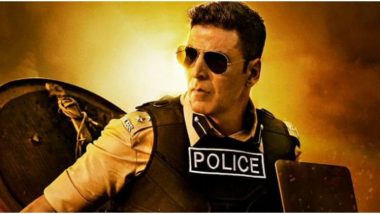 Bollywood actor, Akshay Kumar is all set to impress the masses with his next titled Sooryarvanshi. Helmed by the terrific filmmaker, Rohit Shetty, it's Katrina Kaif who will be seen opposite Kumar in this one. The film is expected to release on March 24, 2020, and will cash in on the Gudi Padwa holiday. Having said, a well-known trade analyst just teased fans with an all-new update surrounding the cop drama. While we all know that the trailer of Sooryavanshi will be out on March 2, now we hear it's going to be a four-minute action-packed trailer. Yes, the said news is confirmed by Taran Adarsh on Twitter. Sooryavanshi: Before Playing His Mother, Did You Know Neena Gupta Had Worked With Akshay Kumar in Another Movie, Also Starring Sridevi?

Along with this, the tweet also made a revelation that the trailer launch will be held in Mumbai where Singham aka Ajay Devgn and Simmba aka Ranveer Singh will also be present. So, it's going to see all the three cops from Shetty's universe under one roof. Isn't that spectacular? Adarsh also mentioned that he has already watched the trailer of Sooryanvanshi and has termed it as 'fantastic'. Sooryavanshi: Badhaai Ho Actress Neena Gupta To Play Akshay Kumar's Mother But Their Bonding Will Be Quirky.

#SooryavanshiTrailer is of 4 minutes duration... Trailer drops on 2 March 2020 at an event in #Mumbai... #Singham, #Simmba and #Sooryavanshi will attend the trailer launch.

#Xclusiv: Watched #SooryavanshiTrailer... Absolutely fantastic 🔥🔥🔥... #RohitShetty is the undisputed emperor of entertainers, #Sooryavanshi reaffirms the fact... Great to see #AkshayKumar in action mode... Get ready for Tsunami at the BO, this one promises to be a huge winner! pic.twitter.com/5hIlRmx9dQ

Are you excited? As we are for sure. Meanwhile, in other news, Sooryavanshi is Akshay and Katrina's first time with the director, Rohit Shetty. Apart from the leads, the film will also see Gulshan Grover, Abhimanyu Singh, Niharica Raizada, Jackie Shroff, Sikandar Kher and Nikitin Dheer. Stay tuned!

(The above story first appeared on LatestLY on Feb 29, 2020 03:13 PM IST. For more news and updates on politics, world, sports, entertainment and lifestyle, log on to our website latestly.com).