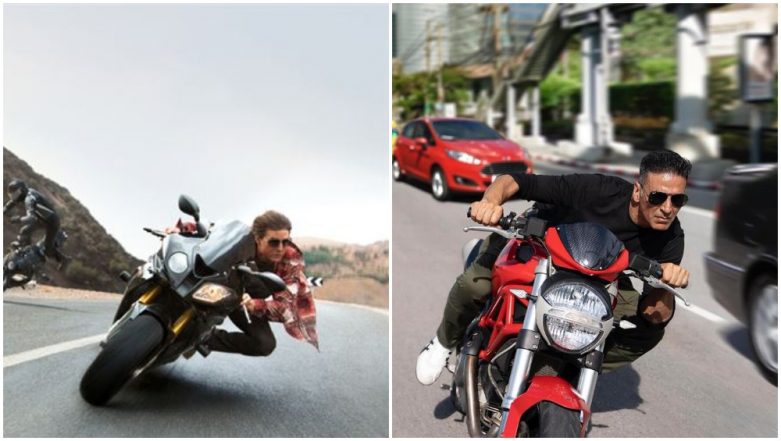 Akshay Kumar is teaming up with blockbuster director Rohit Shetty for the very first time in Sooryavanshi. The movie is a part of the Singham-verse (yes, that's a thing now), and Akshay Kumar had already given us a tease of his character, Veer Sooryavanshi, in Ranveer Singh's Simmba (also a part of this universe). Akshay Kumar is playing an ATS officer in Sooryavashi, the shooting for which has already commenced. Katrina Kaif is the female lead. Sooryavanshi New Still: Akshay Kumar’s Picture Might Bother the Traffic Police.

At present, Rohit Shetty is filming some action scenes in Thailand with Akshay Kumar, and the makers have revealed a still from the film. The picture, that went viral within minutes, has Akshay Kumar zooming away on a Ducati bike on the roads of what we assume to be either Bangkok or Pattaya. As always, Akshay Kumar is stylish in whatever he is doing, though he continues Bollywood heroes' aversion to wearing a helmet.

Blazing through the wind on the sets of #Sooryavanshi!🔥 @akshaykumar pic.twitter.com/aIaZ4yiGHz

Fans immediately noticed the similarity of this bike stunt with that of Tom Cruise in the Mission: Impossible franchise, and compared the swag of Akshay with that of the Hollywood star. Check out the fan reactions from Twitter below!

SPOT the difference !! Indeed one of the biggest action hero in the world 🔥🔥🔥action toh another level hoga 👏👏#AkshayKumar #Sooryavanshi pic.twitter.com/5eth9zSfFu

Tom Cruise has done bike stunts scenes in most of the Mission: Impossible movies, including the latest instalment, Fallout. And yeah, even he has an aversion for wearing helmets! So which star had more swag in the bike scene - Akshay Kumar or Tom Cruise? Share your thoughts in the comments section below.