Rhea's lawyer Satish Maneshinde has revealed that they will take a legal action against everyone who was involved in spreading fake and false claims against Rhea in media. 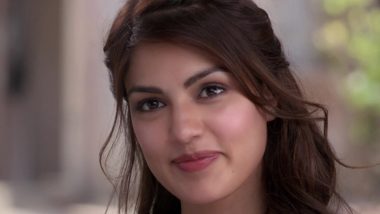 The Sushant Singh Rajput death case has been grabbing the limelight for a long time now. In the controversy, many celebs were dragged, one of them being his girlfriend Rhea Chakraborty. Now, her lawyer Satish Maneshinde has revealed that they will take a legal action against everyone who was involved in spreading fake and false claims against Rhea in media. Rhea Chakraborty Visits Santa Cruz Police Station to Mark Attendance, Photographed First Time After Getting Bail.

He was quoted saying, “We will start going after people who defamed and tried to destroy her life and morale for two minutes of glory on electronic media carrying fake news. One such person is Dimple Thawani, who claims she is a SSR fan, and believes she is his soulmate due to a past life connection. She claims that someone told her that SSR dropped Rhea home on June 13."

He has also stated that they will forward a list of names to CBI who made false claims against her on Television and electronic media. He added,"We will request the CBI to initiate legal proceedings against them for misleading the investigations.”

“We will be forwarding a list of people to CBI who made fake& false claims on Electronic Media & carried fake stories on SSR case with reference to #RheaChakraborthy. We will request CBI to take legal proceedings against them for misleading investigations.” - Satish Maneshinde

Rhea was questioned by Narcotics Control Bureau (NCB) under the allegations of providing drugs to the late actor. She was arrested and recently let out on bail. She has been asked to submit her passport with the agency and ordered to report 11 am to 5 pm till 17 October 2020.

(The above story first appeared on LatestLY on Oct 11, 2020 09:22 PM IST. For more news and updates on politics, world, sports, entertainment and lifestyle, log on to our website latestly.com).