Actress Reem Shaikh is all set to make her big-screen debut with Jayantilal Gada's Pen Films production Gul Makai. The movie made it to the news for being Malala Yousafzai's biopic. 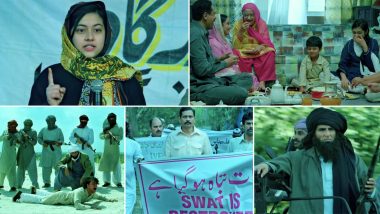 Actress Reem Shaikh is all set to make her big-screen debut with Jayantilal Gada's Pen Films production Gul Makai. The movie made it to the news for being Malala Yousafzai's biopic. For those uninitiated, Malala Yousafzai is the youngest-ever Nobel Prize laureate. She became an inspiration for the entire world after she took a bullet in the face by the Taliban, for encouraging the need for girl child education. She was airlifted from her Rawalpindi to the UK after her condition improved and she made a full recovery along with her movement of girl child education. 'Gul Makai' Bollywood Biopic on Nobel Peace Prize Laureate Malala Yousafzai Being Shot in Jammu and Kashmir

The trailer of the film was released today and depicts the life of Malala and how with her father as her backbone, Mala went on to become the much-needed change in her society, until she was shot by the Taliban.

While Reem Shaikh is quite the established name in the television space and is currently seen in the lead role in Zee TV's Tujhse Hai Raabta, will be seen making her big-screen debut in the film. She was earlier seen in a cameo in Wazir. Seen alongside Reem in the movie, will be acclaimed actors Atul Kulkarni and Divya Dutta, who will essay the role of her parents. The movie will be releasing on January 31, 2020.

(The above story first appeared on LatestLY on Jan 09, 2020 07:29 PM IST. For more news and updates on politics, world, sports, entertainment and lifestyle, log on to our website latestly.com).