Saif Ali Khan and Hrithik Roshan’s upcoming Hindi film Vikram Vedha is the remake of the Tamil neo-noir crime thriller of the same name that had featured R Madhavan and Vijay Sethupathi in the lead. 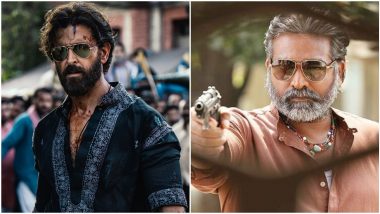 Saif Ali Khan and Hrithik Roshan’s upcoming Hindi film Vikram Vedha is the remake of the Tamil neo-noir crime thriller of the same name that had featured R Madhavan and Vijay Sethupathi in the lead. Pushkar–Gayatri, the original writer-director duo, would be helming the Hindi version as well. The film released in 2017 starred Madhavan as an honest police officer and Sethupathi as a gangster. Hrithik celebrates his 48th birthday on January 10 and on this special day his first look as Vedha has been unveiled. Vikram Vedha: Hrithik Roshan’s First Look From the Action-Thriller Unveiled on His Birthday (View Pic).

Hrithik Roshan has stepped into Vijay Sethupathi’s shoes to play the role of Vedha in the Hindi version of Vikram Vedha. Dressed in a kurta, sporting thick beard and messy hairdo, those pair vintage sunglasses, this blood-soaked criminal has left everyone impressed. In fact, we all we can say is that Bollywood’s Greek God can pull off any look, any role with absolute ease. But one just can’t stop comparing his look to the original gangster, Vijay Sethupathi. The Tamil superstar’s salt and pepper avatar, dressed up in plain shirt, with a fierce look gave pure villain vibes. While some think Hrithik is the badass gangster, others think it is Sethupathi. Vikram Vedha: Hrithik Roshan’s Gangster Look Makes R Madhavan Say, ‘Now That’s A Vedha I Do Want To See’.

Whose Gangster Look As Vedha Is More Impressive?

The Hindi version of Vikram Vedha is all set to be released on September 30. The film will also feature Radhika Apte in a key role. Before the movie releases worldwide, let us know who according to you looks more impressive as a gangster, Hrithik Roshan or Vijay Sethupathi? Vote Now!

(The above story first appeared on LatestLY on Jan 10, 2022 12:17 PM IST. For more news and updates on politics, world, sports, entertainment and lifestyle, log on to our website latestly.com).