As Vivek Oberoi celebrates his 50th birthday on September 3, we take a look at his top five roles from Bollywood that need your attention now. Read on! 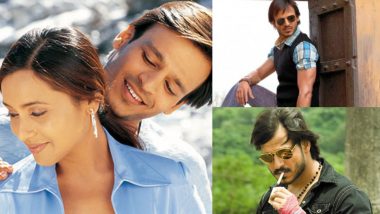 Vivek Anand Oberoi made his Bollywood debut in 2002 and then there was no looking back. The actor starred in many films, but, his career was abruptly halted by a controversy. However, after a hiatus, the actor bounced back and proved that he is here to stay. In his career so far, he has starred in movies where he shined as an artist. Even though it was RGV's Company that was his debut vehicle, but it was Saathiya that made him an overnight star. And as the actor celebrates his 45th birthday today (September 3), let us take a look at his top five popular roles. Vivek Oberoi Meets Jasprit Bumrah, Cheteshwar Pujara at Dubai Airport as They Chat About India's Historic Win Against Australia (View Post).

Helmed by Ram Gopal Varma, this movie was Vivek's debut film which showed him as an angry young man who wants to make it big in the underworld. His performance in the flick also had won him two Filmfare awards. Indeed, debut ho toh aisa!

While Company saw him as a don, Saathiya introduced him as a romantic hero and rest his history. Paired opposite Rani Mukerji as Aditya, he instantly became every girl's dream man. The story of the film revolves around how a crack develops in the couple's fairy-tale romance, after getting married.

After Company, Omkara, Vivek proved he was a master in playing villainous or grey roles on the big screen. And in 2007, he wore the gangster shoes again by playing Maya Dolas in this Apoorva Lakhia directorial.

If Hrithik Roshan was a perfect superhero in Krrish 3, Vivek as Kaal was a superb villain. With his army of mutants and other powers, the actor was amazing as a bad man in the film.

That's it, guys! These are some of the roles of Vivek Oberoi that need your attention. The actor was last seen playing the role of PM Narendra Modi in the 2019 movie of the same name. Lastly, we wish the talented star a very happy birthday. Stay tuned!

(The above story first appeared on LatestLY on Sep 03, 2021 08:10 AM IST. For more news and updates on politics, world, sports, entertainment and lifestyle, log on to our website latestly.com).