In an interview with a leading tabloid, veteran actress Zarina Wahab, mother of Sooraj Pancholi has stated that her son’s name is ‘unncessarily being dragged’ in Sushant Singh Rajput’s death case. 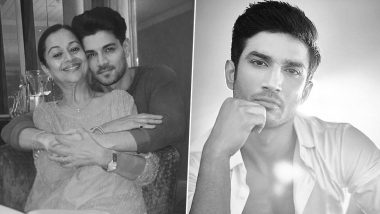 Sushant Singh Rajput was found hanging in his Bandra apartment in Mumbai on June 14. Since then numerous speculations are going around his death. With each passing day, new theories crop up and many names get dragged in this case. One among them is actor Sooraj Pancholi whose name is being linked to Sushant Singh Rajput and Disha Salian’s death case, who had briefly managed the actor. SSR and Disha had died within a week’s difference and that sparked more speculation. In an interview, Zarina Wahab not only clarified that her son Sooraj has not even met Disha, but also rubbished all the rumours linked to Sushant’s death case. Sushant Singh Rajput Death Probe: CBI Team to Reach Mumbai by Thursday Evening to Begin the Investigation.

In an interview with a leading tabloid, veteran actress Zarina Wahab, mother of Sooraj Pancholi has stated that her son’s name is ‘unncessarily being dragged’ in this case. She told Mid-Day, “I know who is doing this but Sooraj’s name is unnecessarily being dragged. I hope Sushant gets justice, and the CBI enquiry starts, so that innocent people are not targeted. Sooraj has nothing to do with this case. It’s not right to push him to the corner. He is innocent, and the truth will come out.” Sushant Singh Rajput's Dil Bechara Co-Star Sanjana Sanghi Lauds SC's Verdict of CBI Enquiry.

On August 19, the Supreme Court announced the transfer of Sushant Singh Rajput’s death case to the CBI for further investigation. The SC has also ordered the Mumbai Police to handover all the evidences and other important documents related to this case to CBI, who would now be handling the case. There were several industry members and fans of the late actor who lauded SC’s decision of transferring SSR’s case to CBI.

(The above story first appeared on LatestLY on Aug 21, 2020 11:11 AM IST. For more news and updates on politics, world, sports, entertainment and lifestyle, log on to our website latestly.com).