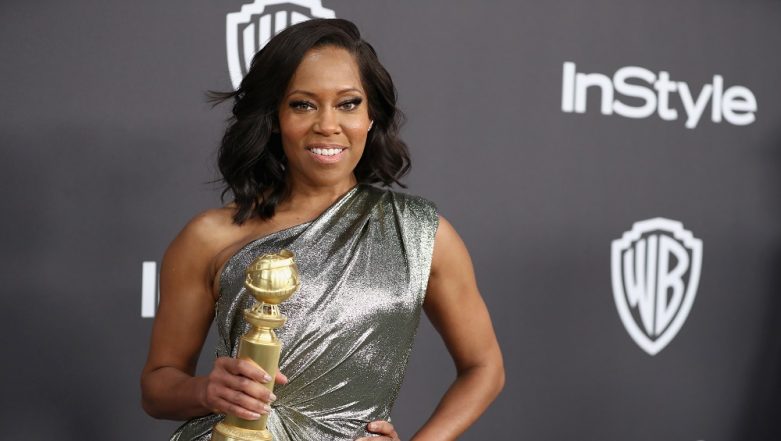 Los Angeles, January 7: Actress Regina King accepted the Golden Globe for her performance in "If Beale Street Could Talk" with a promise to produce projects with 50 per cent women. "So often, everyone out there that hears us on a red carpet and they say celebrities are using the time to talk about ourselves when we are on our soap box and using a moment to talk about the systemic things that are going on in life, time's up times two," King said as she got on the stage to pick the trophy in Best Performance by an Actress in a Supporting Role category in the gala here on Sunday.

"The reason why we do this is because we understand that our microphones are big and we're speaking for everyone. "I am going to use my platform to say right now that in the next two years, everything that I produce and I am making a vow and it's going to be tough to make sure that everything that I produce, that it's 50 percent women," she added. 76th Golden Globe Awards: Ryan Seacrest Slammed for Flaunting Time’s Up Bracelet at Ceremony.

Her promise comes a year after more than 1,000 women in the entertainment industry to initiate Time's Up movement to combat sexual misconduct and increase pay equity across industries. The ceremonial music began to play her off at one point, but as King continued to deliver her speech, the music was cut off and she was able to finish. Jeff Bridges Gets Cecil DeMille Award at the 76th Golden Globes, Says We Can Make a Difference.

"I just challenge anyone out there who is in a position of power, not just in our industry, in all industries, I challenge you to challenge yourselves and stand with us in solidarity and do the same," King concluded. She won for her role as Sharon Rivers in Barry Jenkins' project. She is seen in a role of a mother advocating for her daughter's husband who is in prison for a crime he didn't commit.

King also expressed her fondness for Jenkins while accepting the award. "I love you with all my heart. Thank you for your empathy. Thank you for telling stories so rich and thank you for giving us a film that my son said to me when he saw it, that it was the first time he really saw himself. Thank you so much for that."