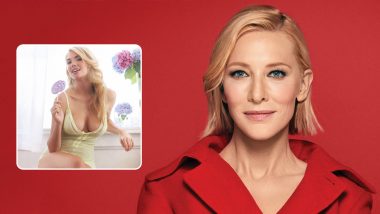 Hollywood star Cate Blanchett, who is married to playwright Andrew Upton, says she was mistaken for actress-model Kate Upton because of her marital surname. Blanchett, who is mother of Dashiel, 18, Roman, 16, Ignatius, 12, and five-year-old Edith was mistaken for Kate, when her sons went to secondary school because their fellow students thought she was the model, reports femalefirst.co.uk. "A fun thing happened when my boys started at their all boys' school. Their surname is Upton so I'm down on the register as Cate Upton. Stateless: Cate Blanchett Reacts to the Criticism at Her Detention Drama on Netflix for Casting White People As Refugees

"Now, there's another Kate Upton who is a rather attractive young swimsuit model and the boys at my son's school asked, 'Wait... is your mum Kate Upton?' They said, 'Yeah'," Blanchett told OK! magazine. She added: "And so, when I showed up on the first day to pick them up, I could see the utter disappointment on those 12-year-old boys' faces. I thought, 'What have I done?' The disgust and disappointment was incredibly real! They were so looking forward to those play dates." The "Thor: Ragnarok" star says her meal times with her children are for "robust" discussions. Cate Blanchett on Gender Disparity in Hollywood: Pushing Towards Equality Is Not Just a Fashionable Moment in Time

She said: "I definitely think that, as one gets older, our opinions can calcify - that's why I am so grateful to my teenage children for keeping me current. Our family meals are a time for very robust and challenging discussions - and we welcome that. We push back and they push back at us. It's wonderful!" Blanchett says she finds it hard to "let go" of her children now as they are growing up.

She said: "I think the hardest thing is having to let go. My mother always used to say it to me and I'd roll my eyes. She would say, 'You'll always be my child so you have to forgive me because I don't mean to treat you like a child - but that's just how I will always feel about you'.I now completely understand that and it drives my eldest son nuts. It's very hard to let go."

(The above story first appeared on LatestLY on Jul 19, 2020 04:55 PM IST. For more news and updates on politics, world, sports, entertainment and lifestyle, log on to our website latestly.com).