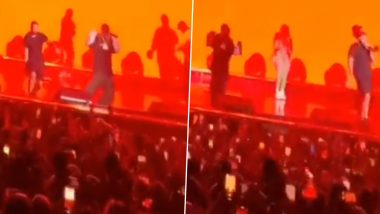 The clip features Drake mixing his songs with 'Didi Tera Devar Deewana' originally picturised on Salman Khan and Madhuri Dixit Nene. The clip has received a mix response and some even claim its fake. Some went on to drop hilarious comments saying that the DJ was Indian. Eminem Speaks About His Struggle With Addiction, Rapper Addresses 2007 Overdose.

One user said that "I was at this show and this never happened." Didi Tera Devar Deewana was sung by Lata Mangeshkar and S.P. Balasubrahmanyam and has been written by Dev Kohli.

(The above story first appeared on LatestLY on Nov 09, 2022 04:59 PM IST. For more news and updates on politics, world, sports, entertainment and lifestyle, log on to our website latestly.com).