Friends The Reunion: Here's Why BTS Gets To be Part of The Sitcom Special Elite Guest List

BTS member RM had once revealed how the sitcom FRIENDS helped him learn English, which seems the reason why they are part of the guestlist for the reunion special episode. Read on. 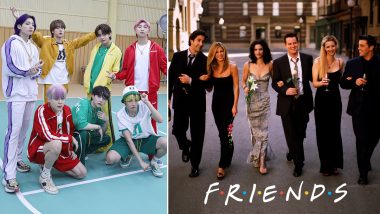 The FRIENDS Reunion episode which is about to premiere on HBO Max on May 27 is one of the hot topics of the discussion RN. While the sextet's reunion is surely a big thing, the other key highlight from the unscripted episode is going to be the guest appearances. As we all know, even the sensational BTS is part of the guest list and the world is waiting to see when the six besties meet the Korean band. Having said that, you know why BTS had gotten the chance to be part of the sitcom special. Well, band member RM (Kim Nam-joon) has the answer. Friends: The Reunion Review – The Episode Is Going to Make You Cry Happy Tears, Critics Give a Thumbs Up to the Special.

As long back, when BTS had made their presence felt on The Ellen DeGeneres Show, RM had revealed that the FRIENDS show helped him learn English. "My mother bought all the seasons of the series on DVD when he was a teenager in South Korea. He said he began watching the show with Korean subtitles, then switched to English subtitles and eventually removed all subtitles completely," RM had told Ellen. Friends Reunion: Date, Time, Where and How You Can Watch the Sitcom Special on HBO Max and ZEE5!

That's not it, sharing his excitement about being part of the reunion, RM recently also told television show ET that, "Ross, Chandler, Monica -- they were my English teachers actually from the States. "I'm so excited about this (TV special)... I feel like I actually became friends with the Friends." Well, this looks fun.

(The above story first appeared on LatestLY on May 27, 2021 12:36 PM IST. For more news and updates on politics, world, sports, entertainment and lifestyle, log on to our website latestly.com).