Friends: The Reunion Review – The Episode Is Going to Make You Cry Happy Tears, Critics Give a Thumbs Up to the Special

The one-off event that was delayed multiple times due to the production shutdown caused by the COVID-19 pandemic is finally airing its final episode, and it has impressed the critics to quite a great extent. The show was originally set to film in February 2020. 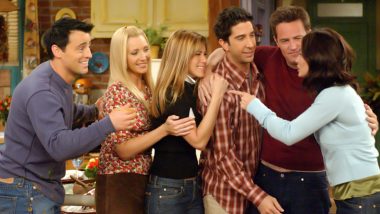 Friends, which first aired in 1994, was a phenomenon during its decade-long run. The show starring Jennifer Aniston, Courteney Cox, Lisa Kudrow, Matt LeBlanc, Matthew Perry and David Schwimmer achieved cult status through TV reruns and streamers. The show has been irreplaceable, and the Friends fan have eagerly been waiting to see the six friends chill for one last time. The Friend: The Reunion episode is just an hour away from its release, and critics have already shared their review on the episode.

The one-off event that was delayed multiple times due to the production shutdown caused by the COVID-19 pandemic is finally airing its final episode, and it has impressed the critics to quite a great extent. The show was originally set to film in February 2020 but was only able to begin filming in April this year at the iconic comedy's original soundstage, Stage 24, on the Warner Bros Studio lot in Burbank, California.

Let us see what the critics have to say about the show:

The Wall Street Journal: The special is best when it revisits the old episodes (“The One With Ross’s Wedding,” “The One With Rachel’s Sister,” “The One With the Monkey”). The one brilliant stroke in this new show, aka “The One Where They Got Back Together,” is having the cast members do a table read of their old scripts; the original physical gestures and facial reactions come back to them through what seems like muscle memory. Throughout the reunion, there are some very genuine-seeming failures by certain performers to remember aspects of the shows that their co-stars recall quite clearly, and the collective, wobbly journey down Mortality Lane comes across as spontaneous and authentic.

First Post:  When David Schwimmer, Lisa Kudrow, Jennifer Aniston, Matt LeBlanc, Courtney Cox, and Matthew Perry reentered Stage 24 of the Warner Bros Ranch in California, it felt like they were catching up after all these years too. There was no missing out since it actually felt like a reunion, and not a party that we have arrived at 17 years late. (Also, Cox aka Monica rearranging the apples on the table of her apartment as soon as she enters really helped.) The 110-minute runtime of Friends: The Reunion felt like both a regular episode of the sitcom and 10 years of it compressed into one. It took us through every emotion that the show or any of its episodes did — there was camaraderie, interminable joy, and understated sadness. But this time, there was another friend sitting in the corner of the room, just smiling at us. It was nostalgia.

The Hindu: The individual reunions too, are fascinating to watch, each hug or handshake revealing much more than they let on. This is just the second time that all the six stars are in the same room together since the show ended, but Aniston, Cox and Kudrow reveal an easy comfort with each other, as opposed to the three guys, indicating how their off-screen friendships have progressed over time.

Time Of India: Friends: The Reunion sure doesn’t have the timeless quality of the show itself but for a one-time gig, it packs quite a punch for its fans and leaves them wanting for more. It seems both, scripted and unscripted, but it entertains anyway. Simply because of its stellar star cast, whose reunion after 17 long years doesn’t feel like they were on a break.

DNA: The episode has innumerable fun-filled moments to tear-jerking sequences which were padded one after the other. The makers of the show David Crane, Marta Kauffman and Kevin Bright speak about how they cast these six characters and the minute they went on air it changed everyone's lives. The six of them sit together for a table-read session where they read the dialogues from the popular episodes 'The One Where Everybody Finds Out' and also 'The One Where Ross Finds Out' (don't miss the BTS story).

India Today:  It starts off really well, with our six characters reading scenes, saving some of the best for the last, and giving fans a real treat. But halfway into the special, the fashion show precisely, you start to think maybe it was good we left them 17 years ago. Friends was the perfect show.

Streamer ZEE5 on Tuesday announced that the much-awaited "Friends: The Reunion" will be available on its platform on May 27, the same day the special debuts on HBO Max in the US. The special will become available for ZEE5 subscribers at 12:32 pm in India, the streaming service said in a statement.

(The above story first appeared on LatestLY on May 27, 2021 12:04 PM IST. For more news and updates on politics, world, sports, entertainment and lifestyle, log on to our website latestly.com).