Holy moly, Pitt said in his acceptance speech, adding: "Thank you to the eclectic and ever raucous Hollywood Foreign Press Association." Pitt received a standing ovation, and said that it was an honour to be nominated alongside his idols, including Hanks and Pacino. 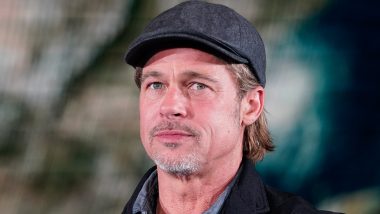 Los Angeles, January 6: Actor Brad Pitt won the Best Supporting Actor trophy for Quentin Tarantino's Once Upon A Time In Hollywood, and accepted the honour with few jokes and a dig at the rumours about his love life. On Sunday night, Pitt took home the Best Actor in a Supporting Role in Any Motion Picture award for his role as stuntman Cliff Booth the movie. This is his third Golden Globe win.

For the award, Pitt was in contention with Tom Hanks (A Beautiful Day in the Neighborhood), Anthony Hopkins (The Two Popes), Al Pacino (The Irishman) and Joe Pesci (The Irishman). Holy moly, Pitt said in his acceptance speech, adding: "Thank you to the eclectic and ever raucous Hollywood Foreign Press Association." Pitt received a standing ovation, and said that it was an honour to be nominated alongside his idols, including Hanks and Pacino. Brad Pitt Withdraws Participation from Oscar Campaign for 'Once Upon a Time in Hollywood' and 'Ad Astra'.

"When I was starting out these names that were just listed were like gods to me. This is an honour," Pitt said. Once Upon a Time in Hollywood is a fictional story of fading stardom told through aging star Rick Dalton (Leonardo DiCaprio) and his stunt double Cliff Booth (Pitt). Tarantino has woven real life stories into the plot with the infamous Charles Manson murders, including late actress Sharon Tate, as a backdrop to make it more intriguing.

Pitt thanked Tarantino and his co-star DiCaprio with a joke. "My partner in crime, LDC," he said with a smile before cracking a Titanic joke. "He's an all-star, he's a gent, and I wouldn't be here without you, man -- still I would have shared the raft," he joked, referencing the way DiCaprio's character dies in the 1997 film.

DiCaprio chuckled at the punchline. Pitt thanked his parents and also referred to the rumours about his love life. "I want to say hi to my folks because, hey," he joked with his arms out wide, adding: "They're back in the Ozarks. I wanted to bring my mom, but everyone I sit next to they say I'm dating."

His former wife and actress Jennifer Aniston was seen laughing at his jokes. Pitt concluded with a sweet message. "If you have the chance to be kind tomorrow, take it. I think we need it," he said.

(The above story first appeared on LatestLY on Jan 06, 2020 02:43 PM IST. For more news and updates on politics, world, sports, entertainment and lifestyle, log on to our website latestly.com).

Comments
Tags:
A Beautiful Day in the Neighborhood Best Actor in a Supporting Role Brad Pitt Cliff Booth Golden Globes Award 2020 Holy moly Leonardo DiCaprio Once Upon a Time in Hollywood Rick Dalton The Irishman The Two Popes
Comments
You might also like