JJ Abrams on the First-Ever Same-Sex Kissing Scene in Star Wars: The Rise of Skywalker: ‘Everyone Is Welcome in the Star Wars Galaxy’

Star Wars: The Rise Of Skywalker director JJ Abrams says he decided to include the first same-sex kiss in the latest release of the franchise to show that there is place for everyone in the Star Wars universe. 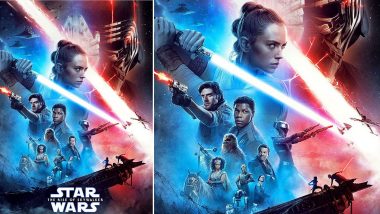 Star Wars: The Rise Of Skywalker director JJ Abrams says he decided to include the first same-sex kiss in the latest release of the franchise to show that there is place for everyone in the Star Wars universe. The brief "kiss" moment between two unknown female characters happened during a celebration scene towards the end of the movie. In an interview with MovieZine, Abrams revealed the idea behind including it, reports dailymail.co.uk. Star Wars: The Rise Of Skywalker Fails To Impress At China Box-office, Lands On Fourth Spot Behind Home-grown Films.

"I just felt like in this one scene of celebration, it felt like an opportunity to show -- without it being, you know, heavy-handed or making too loud of a deal -- it was sort of part of the whole experience to see a same-sex couple have a moment together that was explicitly saying in the Star Wars galaxy, you know, everyone is there and is welcome," he said. Star Wars – The Rise of Skywalker Movie Review: JJ Abrams’s Fan-Baiting Approach Stumbles in Its Attempt to Give the Sequel Trilogy a Befitting Closure.

Asked about his responsibility as a filmmaker to represent diversity and inclusion in his films, Abrams said: "I think it's every filmmaker's responsibility to not only represent the world as it exists as much as possible on-screen, but also behind the camera." He added that his second unit director, Victoria Mahoney, was the first African-American woman in that position in a "Star Wars" movie.

"That was as important to me as having a cast that looked like more of the world than not. I'm also really proud of, not just in front of camera, but also behind the camera, bringing in people who aren't just the usual suspects," he said. With Daisy Ridley, John Boyega and Oscar Isaac leading the cast, Star Wars: Rise of Skywalker wraps up the Skywalker saga that George Lucas started with Star Wars: A New Hope in 1977. The film opened in India on December 20.

(The above story first appeared on LatestLY on Dec 27, 2019 11:36 AM IST. For more news and updates on politics, world, sports, entertainment and lifestyle, log on to our website latestly.com).