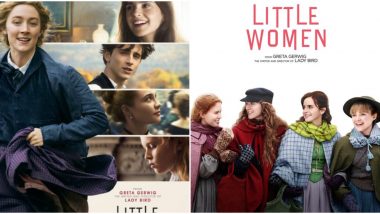 After finding herself in the Oscar race for her debut solo directorial Lady Bird in 2017, director Greta Gerwig is all set to be back with a classic this time as she brings the film adaptation of American author Louisa May Alcott's Little Women to the screens. With an eclectic star cast featuring Saoirse Ronan, Emma Watson, Florence Pugh, Eliza Scanlen, Timothée Chalamet, Laura Dern, and Meryl Streep in lead roles, the film's trailer made a lot of noise. While it left the internet divided about the film vs book debate, there's no doubt that it is one of the biggest films to release over Christmas this year. Kate Winslet, Saoirse Ronan's Film 'Ammonite' Caught in Row Over Fictitious Lesbian Story.

New posters of the film were released recently which consisted of character posters of Saoirse Ronan, Emma Watson and Timothée Chalamet among others. Also, a poster featuring all the major cast members was released. Although, netizens are not very happy with the presentation of these posters which are probably taking away the charm of this classic novel. Twitterati reacted strongly to these posters, calling them "rom-com" rip-offs and so on. Check out some of the reactions to the posters of Little Women here. Emma Watson Shares Picture from Sets of Greta Gerwig's Little Women.

Why is Laurie On the Poster:

I'm gonna let you finish this #LittleWomen thing, but...

1. The correct birth order is Meg, Jo, Beth, Amy yet this makes it look like it's Jo, Meg, Amy, Beth

2. This poster makes it look like a rom-com, but the others are good

3. Why is Laurie even on the poster?? pic.twitter.com/QXlbsN4Z8J

Was there a Graphic Design Team?

the little women graphic design intern after making a 2000s rom com style poster thinking everyone would like it pic.twitter.com/TmlxEMGaZg

How Was This Poster Designed?

As for the film, for the uninitiated, Little Women revolves around the four March sisters as they navigate relationships and sisterhood in the time of Civil War. The film is all set to release this Christmas.

(The above story first appeared on LatestLY on Oct 30, 2019 01:53 PM IST. For more news and updates on politics, world, sports, entertainment and lifestyle, log on to our website latestly.com).